NDF:  Use of landmines not against treaties, int'l pacts | Inquirer News

NDF:  Use of landmines not against treaties, int’l pacts 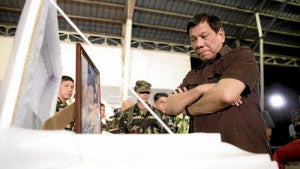 PRESIDENT Duterte pays his respects at the wake of one of the four soldiers killed by the NPA. MALACAÑANG PHOTO

Luis Jalandoni, chairperson of the NDFP negotiating panel, in a statement said that the type of explosives that the New People’s Army has been using have not been prohibited by international treaties.

“(W)e wish to point out that the use of command-detonated land mines is not violative of the Geneva Convention and the Ottawa Treaty,” Jalandoni said.

On Sunday, President Duterte threatened to call off the peace negotiations if the NPA continued using landmines. Mr. Duterte made the statement during a visit at the wake of four soldiers who were killed in clashes with communist rebels.

The NDF has consistently claimed that international treaties only prohibit the use of victim-triggered explosives that do not discriminate targets.

Apart from international laws, the NDF asserts that there are no agreements yet between the communist movement and the government that covers the prohibition of command-detonated explosives.

“The New People’s Army can use these weapons in its military operations inasmuch as there is yet no ceasefire of any kind, which is valid and effective between the NPA and the AFP,” Jalandoni said.

However, the NDF said they understood President Duterte’s harsh public statement during the wake of government soldiers killed in a firefight with communist guerrillas.

“Concerning President Duterte’s statement in Davao last night (Sunday dawn), we address him in his official capacity and not at a personal level. We understand that as commander-in-chief of the Armed Forces of the Philippines, he has the duty to show official and personal concern for his troops and mourn their deaths as casualties of war,” Jalandoni said.

All is not lost and these issues can be settled over the negotiating table when both parties meet in Oslo on August 20, according to Jalandoni.  SFM