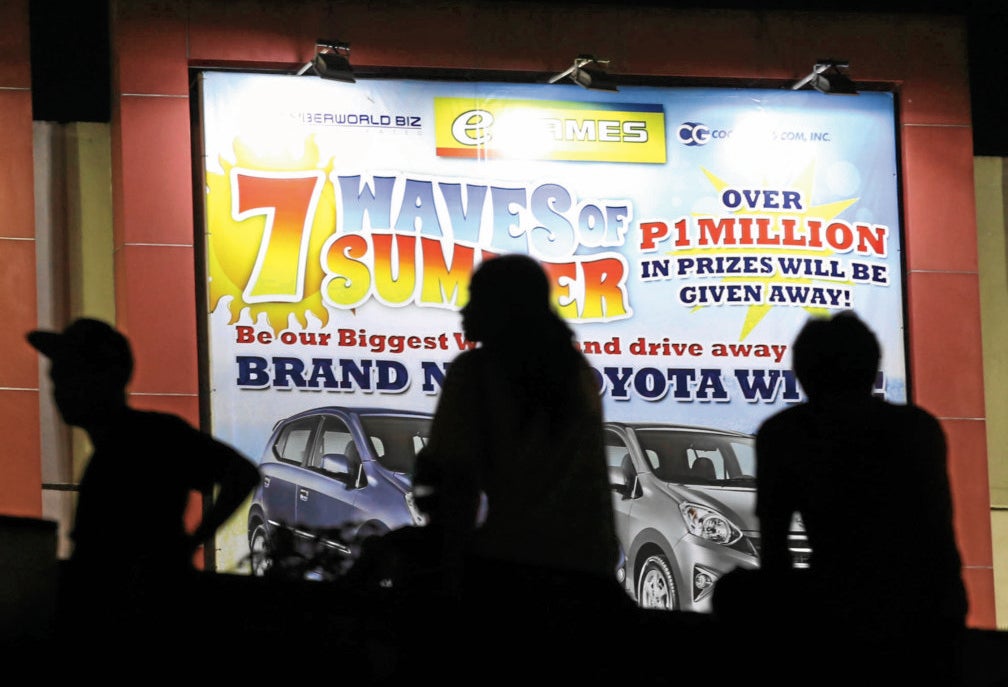 AS MANY as 5,000 workers stand to lose their jobs if one of the country’s largest gaming firms fails to have its license renewed by government regulators―a possible consequence of President Duterte’s stance against online gambling.

A shutdown of publicly listed Philweb Corp. would cost the government at least P2.1 billion in royalty fees that the firm pays to state-run Philippine Amusement and Gaming Corp. (Pagcor) for the right to operate 286 e-Games outlets nationwide, according to the private firm.

Philweb president Dennis Valdes said on Sunday that if the firm’s contract with Pagcor was canceled or not renewed, the company’s license to operate would immediately cease.

“This means Philweb would shut down all operations,” Valdes said in a press statement. “All the suppliers of e-Games, small and medium enterprises that supply goods and services to each e-Games outlet, would also suffer from the shutdown.”

Mr. Duterte has singled out Roberto Ongpin in his campaign against oligarchs, a small group of people who wield economic and political power.

Shortly after the President named him on Aug. 4 as a prime example of an oligarch, Ongpin stepped down as chair and director of Philweb. He also quit his post in all Philweb subsidiaries.

Philweb said Ongpin stepped down to focus on real estate projects developed by
Alphaland Corp., where he has a majority stake.

At an environment summit in Davao City on Aug. 4, the President said he would “destroy the clutches” of the oligarchs.

“These are the guys, who, while sitting inside their planes or their mansions everywhere, are raking in money like taxi meters,” he said in Malacañang on Aug. 3, naming Ongpin as an example.

The President noted that Ongpin kept his influence and hold on power throughout several administrations. Ongpin was a trade minister during the Marcos regime and a “hanger on” during the Ramos, Arroyo and Aquino administrations, he said.

“My plan, my order … is: ‘Destroy the oligarchs [who] are embedded in government now,’” the President said.

Shares of Philweb slid 36.88 percent on the day the President issued his threat against oligarchs.

Mr. Duterte has also vowed to stop online gambling, which has forced Philweb to seek approvals on a monthly basis for its license to operate.

In response to the President’s stance against online gambling, Valdes emphasized that the firm’s internal controls, including the fact that its games cannot be accessed from a home or office computer.

“It is a private, members-only network of clubs where players need to be physically present in order to play,” he said. “Access to these clubs is strictly controlled such that it is only open to members who are over 21 years old and are financially capable of gaming. Each Pagcor e-Games site conforms to location restrictions put forth by both Pagcor and the local government unit.”

The company said Philweb’s possible closure would mean Pagcor would forego its share of e-Games revenue, averaging P6 million a day or over P2.1 billion annually, which comes at no cost to the state gaming agency.

“This same revenue is used by Pagcor to fund its propoor programs, especially the new programs of the current administration,” the company statement said.

“Philweb’s closure would also mean foregone corporate income tax, value-added tax, and other taxes of about P281 million annually to the Bureau of Internal Revenue,” it added.

Most importantly, Valdes said, over 1,500 stockholders, comprising 47 percent of the total ownership of the company, would be affected. They include large foreign funds and small investors.

Valdes also said he received calls from several stockholders expressing their concern over the potential shutdown of the
e-Games network, which could result in the sudden closure of a publicly listed company.