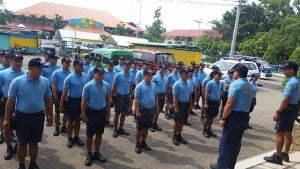 LAPU-LAPU CITY POLICE FORCE AT WORK: Cops were shocked to learn that one of their own, Senior Police Officer 2 Jomar Ybañez, has been tagged a “drug syndicate protector” by President Rodrigo Duterte. They said they had never head of any derogatory report about Ybañez before Duterte’s revelations. (CDN FILE PHOTO)

CEBU CITY — Senior Police Officer 2 Jomar Ybañez was securing the triathletes joining the Cobra Ironman 70.3 km in Lapu-Lapu City on Sunday when he learned that he was among those named by President Rodrigo Duterte as “drug trafficking protectors.”

Still, Ybañez (named as Police Officer 2 Jomar Ibañez on the list) went on to serve as one of the security personnel during the event until he had to talk to Senior Supt. Rommel Bernardo Cabagnot, Lapu-Lapu City Police Office director, about 11 a.m.

Cabagnot said Ybañez vehemently denied that he was involved in drugs or served as drug protector but believed he was dragged into this controversy because he was once part of the police unit tasked to conduct the anti-illegal drug campaign in the city.

“I told him to report Camp Crame if he was innocent,” Cabagnot said.

Cabagnot said he brought Ybañez to Chief Supt. Noli Taliño, police director for Central Visayas,  who was at the Ironman venue.

Cabagnot said Taliño also advised Ybañez to report to Camp Crame so he could clear his name.

Ybañez wanted to be at Camp Crame by Monday but Cabagnot said this would depend on the availability of the flight because most of the athletes would be going back also to Manila.

Other policemen from Lapu-Lapu City who knew Ybañez said they were shocked to learn that he was on the list because they had not heard of any derogatory report about him before President Duterte’s watch list.  SFM