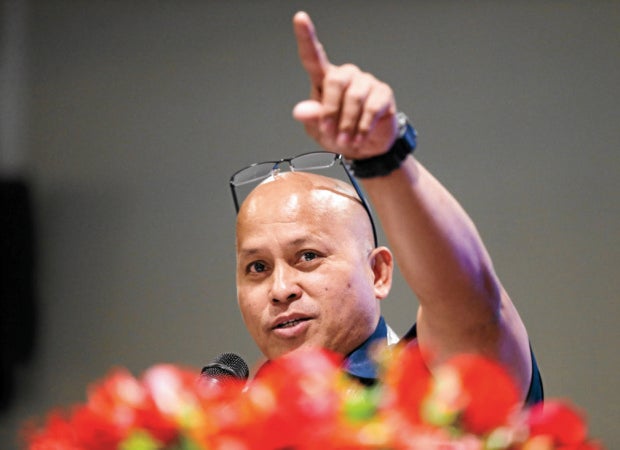 Sueno, who has supervision over the PNP, directed Dela Rosa to look immediately into the deaths of hundreds of drug suspects during law-enforcement operations and in almost nightly attacks in slums across the country that have been blamed on so-called vigilantes.

“This administration will not allow vigilante killings of illegal drug or crime suspects, and their unjust killing during police operations,” Sueno said in a statement.

“All recorded vigilante killings of narcotics and crime suspects should immediately be investigated,” he said.

Sueno said administrative charges should be immediately brought against “all police officers proven to have been involved in unjust killings” of drug suspects.

He also directed Dela Rosa to remind all policemen to observe proper procedures in carrying out arrests or raids and searches.

Sueno also ordered the PNP Internal Affairs Service to investigate police operations that had led to violations of human rights.

He directed Dela Rosa to submit a report to the Office of the Interior Undersecretary for Peace and Order.

There was no immediate comment from Dela Rosa on Saturday.

Inquirer monitoring showed that 660 drug suspects have been killed between July 1 and Aug. 4. Of the killings, 436 were by police and 224 by vigilantes.

July 9 was the deadliest day in Mr. Duterte’s war on drugs, with 23 suspects killed.

During the first four days of August, 64 drug suspects were killed—34 by police and 30 by unknown assailants.

The unprecedented killings have drawn the attention of international rights groups and the United Nations Office on Drugs and Crime, which have called for a halt to the slayings and compliance with international norms in the Philippine campaign against drugs.

But Mr. Duterte has refused to heed such calls, warning drug dealers instead that seeking human rights protection will not save them from death.

On Friday, the President gave shoot-to-kill orders against drug dealers, including politicians involved in the narcotics trade.

Angered by the shooting of a police officer during a law-enforcement operation against drugs in Magsaysay, Davao del Sur province, on Wednesday, Mr. Duterte vowed to maintain the shoot-to-kill order throughout his six years in office.

“This campaign [of] shoot to kill will remain until the last day of my term, if I’m still alive by then,” the 71-year-old President said at a news conference in Davao City.

“I don’t care about human rights, believe me,” he said.

Mr. Duterte also offered soldiers and police his “official and personal guarantee” of immunity from prosecution for killings undertaken in the performance of their duties.

“For as long as it is done in the performance of duty of soldiers and police, I’ll answer for it. That is my official and personal guarantee,” he said.

“I will answer for the deed. If policemen are involved in encounters [with drug suspects], don’t investigate it,” he added.

The presidential guarantee puts into doubt Sueno’s order to Dela Rosa to bring charges against policemen who will be proven to have violated the rights of drug suspects, although the police overseer may have issued the directive on instructions from the President.

In a speech in Davao City late on Thursday, Mr. Duterte acknowledged abuses in his war on drugs and promised an investigation.

He said most drug dealers and users slain by police had put up a fight, but added that he was sure some were “salvaged,” a local slang for extrajudicial killings usually by law enforcers.

In the case of illegal killings, Mr. Duterte said the government would investigate.

Mr. Duterte, who was elected on an anticrime platform that included wiping out illegal drugs in six months, said international organizations had no business complaining about his campaign against the narcotics trade.

“I’m waging a war. I am now invoking the articles of war,” he said.

Mr. Duterte said he had no fear the campaign would cause his impeachment and removal from office.

“The Filipino is crying for justice” from crimes committed by drug dependents, he said. With reports from AFP and AP/TVJ

Duterte: Don’t use human rights as excuse to destroy PH