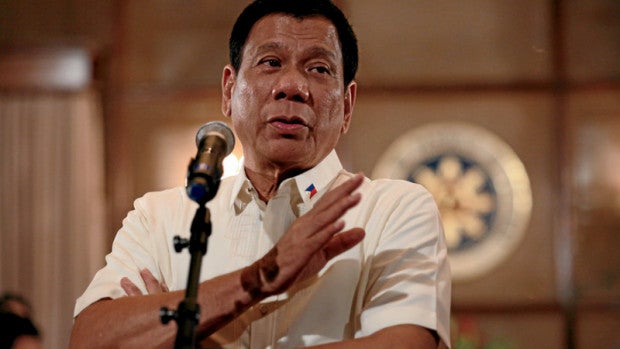 President Rodrigo Duterte on Friday repeated his “shoot-to-kill” order against those involved in the illegal drugs trade who would resist arrest.

In an interview in Davao City, Duterte guaranteed to answer for state forces involved in shooting incidents related to their duty in his administration’s war against drugs.

“For as long as it is done in the performance of the duty by the police and soldiers, akin ‘yan (that is my responsibility), that is my official and personal guarantee,” he said.

“Basta may police diyan na nag engkwentro, huwag na ninyo imbestigahan ‘yan, order ko ‘yan (If there are police involved in an encounter, do not investigate them anymore, that is my order),” he added.

Asked to clarify his shoot-to-kill order, he said “Shoot to kill is to shoot and kill him. Kasi wag kang magsayang ng bala (I don’t want the police wasting bullets).”

Duterte  earlier issued made a “shoot on sight” order against Albuera, Leyte Mayor Rolando Espinosa Sr. and his son Kerwin on grounds of their alleged drug ties.

The elder Espinosa has already surrendered, while Kerwin remains at large.

Duterte is reportedly set to announce the names of local executives involved in the illegal drugs trade anytime Friday.

In a statement, Presidential Spokesperson Ernesto Abella said Duterte’s statement on “narco-politicians is congruent with government policy on maintaining and protecting peace and order in the nation.”

“He has given due and ample notice that the clear and present danger of drugs engulfing the nation will be addressed and law enforcers will neutralize those who resist or endanger the lives of arresting officers,” he said.IDL/rga