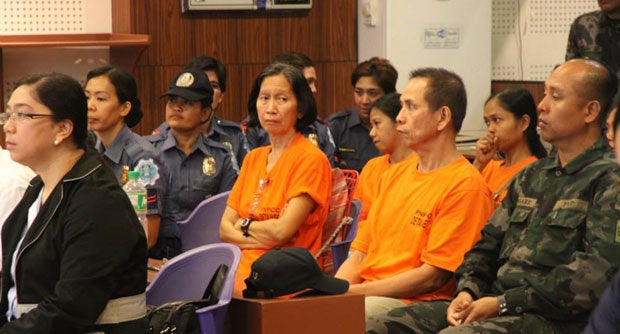 Benito and Wilma Tiamzon at the Multi-Purpose Center in Camp Crame, Quezon City during their inquest proceedings. FILE PHOTO/PNP PIO

The Supreme Court has rejected the request of the government for the temporary release of  all 11 leaders of the National Democratic Front (NDF) to attend the peace talks in Oslo, Norway.

In its resolution released Friday, the high court only allowed former party-list Representative Satur Ocampo and NDF panel members Randall B. Echanis and Vicente P. Ladlad to attend formal negotiations expected to resume on the fourth week of August this year.

The high court issued the resolution following an urgent manifestation made by the government through Solicitor General Jose Calida saying President Rodrigo Duterte already ordered the temporary release of several members of the NDF under the Joint Agreement on Safety and Immunity Guarantees (JASIG).

But the high court denied the request, saying it has no jurisdiction over the said individuals who are facing criminal charges in various courts.

“[It] concerns the substantive issue of jurisdiction that belongs not to this Court but in the Regional Trial Courts hearing the various cases which are now in different stages. To grant temporary and conditional liberty to these personalities may have the inadvertent but irremediable effect of preempting the trial courts’ own determinations in the exercise of their original jurisdiction to try the cases before them,” the high court said.

The high court said the appropriate pleading should be filed before the concerned regional trial courts.

“Needless to say, the concerned Regional Trial Courts shall give utmost priority to the hearing of such motions and manifestations in view of the grave importance of peace to the Filipino people. The relevance of the attendance and participation of the other personalities adverted to in the Urgent Manifestation and Motion to the peace process are matters that must be brought before these courts,” it added.

Once their participation ceases or the peace negotiations are terminated, their respective bonds shall be deemed automatically canceled.

The high court added that their provisional liberty shall continue to be secured by the cash bond worth P100,000 already posted with the Office of the Clerk of Court of the Supreme Court.

It also required the two to provide Regional Trial Court of Manila, Branch 32 their contact information in the Philippines and in Norway and report to the Embassy whenever required.

In the case of Rafael Baylosis, the high court forfeited his cash bond after he jumped bail.

Ocampo, Ladlad, Echanis and Baylosis are facing murder charges following the discovery of a mass grave in Leyte containing remains of those believed to be victims of “Operation Venereal Disease” to purge the Communist Party of the Philippines/New People’s Army of  suspected military informers. The case is currently being heard before the Regional Trial Court of Manila, Branch 32. IDL/rga