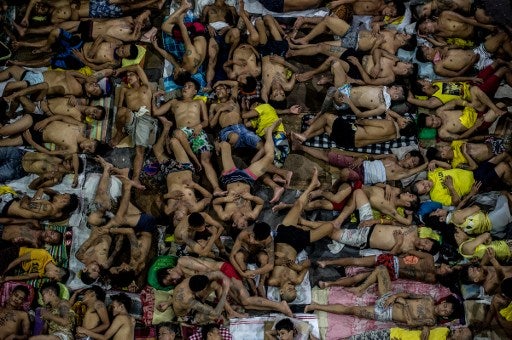 Inmates sleep on the ground of an open basketball court inside the Quezon City jail at night in Manila in this picture taken on July 19, 2016.
There are 3,800 inmates at the jail, which was built six decades ago to house 800, and they engage in a relentless contest for space. Men take turns to sleep on the cracked cement floor of an open-air basketball court, the steps of staircases, underneath beds and hammocks made out of old blankets. AFP FILE PHOTO

To decongest the country’s prisons, President Rodrigo Duterte should grant parole or pardon to “lonely, old, sick and infirm inmates who have paid their debt to society,” Senate Minority Leader Ralph Recto said on Thursday.

Recto believes that releasing the “old, infirm, or gravely- or terminally-ill prisoners,” especially those who are not guilty of heinous crimes, was one of the quick solutions to ease overcrowded jails.

“If Duterte is planning to release so-called ‘political prisoners’ as part of the trust-building steps to clinch a peace deal with Communists, then he must set in motion a process that will grant liberty to prisoners sick of cancer, the aged, the infirm, those who can be freed on humanitarian grounds,” he said in a statement.

Recto pointed out that based on an official report, former President Benigno Aquino III exercised his power to grant executive clemency 67 times during his six years in office.

“It is one record President Digong can easily top. And he must use this power to forgive lonely, old, sick and infirm inmates who have paid their debt to society,” he said.

The senator has also filed a resolution urging the Senate to probe “the worsening conditions” in the country’s prisons which he said would cost taxpayers P10.1 billion to maintain this year.

Another compelling reason why prisons must be reformed, he said, was the expected rise in the number of inmates following the administration’s war on crime and illegal drugs.

“There’s a need to find space for them because our standing-room-only prisons are filled to the rafters,” said Recto.

The senator said the Bureau of Jail Management and Penology (BJMP) jails are now 375 percent overcapacity with “cells built for 18,881 prisoners now housing 93,961.”

Based on prison manuals, the ideal cell space should have been 4.7 square meters per detainee but Recto said an official BJMP report said that the national average was one square meter per detainee.

He said records of the BJMP also showed that the top four most congested BJMP jails are in Malolos City, Bulacan; San Pedro, Laguna; General Trias, Cavite; and the female dormitory of Quezon City Jail has a congestion rate of 2,000 percent.

The same report, he said, showed that 575 women prisoners in the Quezon City jail are packed into 129 square meters of cell space built for 27. Those ranked 4 to 20 on the list of most congested BJMP jails have congestion rates of 1,425 percent to 1,765 percent, the senator said.

On the other hand, jails being run by the Bureau of Corrections (BuCor) recorded an overall overcapacity rate of 158 percent this year.

Recto warned that deteriorating living conditions in jails and prisons expose detainees and inmates to hazards like the onset of infectious disease epidemic, higher suicide rates and frequent inter-prisoner violence.

“Overcrowding and other problems in the Philippine corrections system could affect the security of the government jail and prison custodians, provide opportunities for acts of corruption, and cause the violation of the normative standards of jail and prison management,” he said.

“Instead of rehabilitating prisoners, harsh jail conditions could make them hardened criminals, with jails serving as masteral schools for a career in crime.”

He said the government could also ease jail and prison congestion by reforming the justice system “so that there will be fast trials, minimum court hearing postponements.” RAM/rga