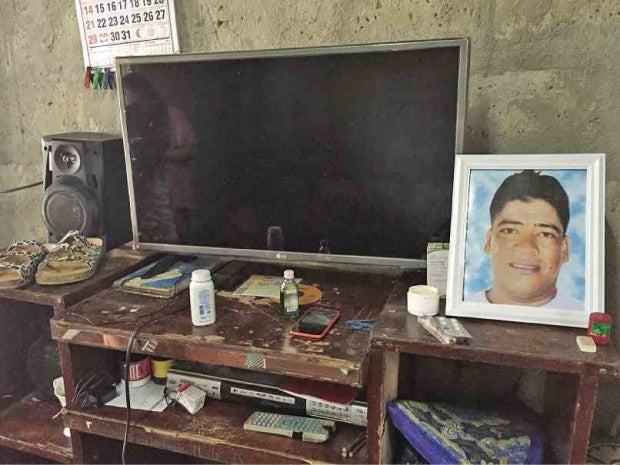 SUDDENLY BLACK In an instant, Lamberto Rodriguez’s family lost a father in a predawn attack on their Muntinlupa City home. His portrait now sits in a place that is impossible to miss at the grief-stricken household. ANNELLE TAYAO-JUEGO

This is how her 14-year-old daughter will start to cope, according to Myrin Rodriguez. Yes, the mother told the teener, “just think your father is working hard for us abroad.”

And so it can be said that the daddy, Lamberto, “left” them around 3 a.m. of July 28, when a group of masked men barged into the family’s small home in Southville 3, Barangay Poblacion, Muntinlupa City. The men found their target sleeping on a cot next to his daughter and 10-year-old son.

Myrin Rodriguez had just stepped out of the bathroom when the three intruders pointed a gun at her and the two children. One of the masked men then grabbed Lamberto and dragged him out to the alley just outside the house, where a fourth accomplice was waiting.

“Then I heard five gunshots,” said Rodriguez, 38. The police arrived less than 30 minutes after the gunmen had fled.

In an interview on Wednesday, Rodriguez could think of only one thing to connect to her husband’s killing: Two weeks earlier, Lamberto surrendered to the police under “Oplan Tokhang,” the campaign that has gotten thousands of drug users and pushers to come out and be registered.

Rodriguez said she knew her husband had been a drug user even before they got married 17 years ago. “But he was not a pusher.”

‘He stood his ground’

“When the police interviewed him, Lamberto said he was being forced to admit he was selling drugs; he stood his ground and told them he was only a user,” she stressed.

Leopoldo Bernabe, deputy chief of the barangay police assigned to Southville 3, confirmed that Lamberto had surrendered and agreed this was a possible factor in his death.

“We’re looking at multiple angles. He could have submitted names of people also involved in drugs who could have gotten word about it. Maybe he failed to pay off a debt. Maybe he surrendered because he couldn’t pay [his supplier] anymore,” Bernabe said.

The village official said there was an earlier attempt on Lamberto’s life last year, when a man on a motorcycle tried to shoot him. If it was a drug-related incident, Bernabe could not say.

Rodriguez, however, said her husband turned himself in with the intention of turning over a new leaf. The night before he died, Lamberto even cracked a joke about finally taking a bath because he was starting a new life.

Asked if they had supported the antidrug campaign of President Duterte despite her husband’s activities, Rodriguez replied: “We voted for him. We are [members of] Iglesia ni Cristo, so we followed what our church told us to do.”

It’s a choice Rodriguez doesn’t seem to regret, even when she’s now a widow left to raise two schoolchildren on her measly earnings selling vegetables. “What’s done is done,” she said wistfully. “In a way, I’ve come to accept what happened. My husband was guilty of a few sins.”

She emphasized though that Lamberto was a good husband and a hands-on father.  When not working as a tricycle driver, Lamberto watched over the children while she was at the market.

Lamberto was laid to rest on Tuesday at a nearby cemetery; Rodriguez said her in-laws preferred to have the funeral done quickly. As a simple tribute, a lone photo of the deceased now sits next to the TV set.

“I think [the kids] are slowly starting to accept his death, too,” Rodriguez said.

However, her son, who was lying on the same cot where his father slept next to him for the last time, has since kept asking: “Ma, what does ‘condolence’ mean?”

“Sometimes I find him staring blankly into space, like he’s still in shock,” Rodriguez said of the boy.

“And my daughter, she was holding on to Lamberto when he was being dragged outside that night,” the widow recalled. “She’s a Daddy’s girl. But what’s done is done.” TVJ