No eulogies at funeral: ‘Baka ma-Duterte’ 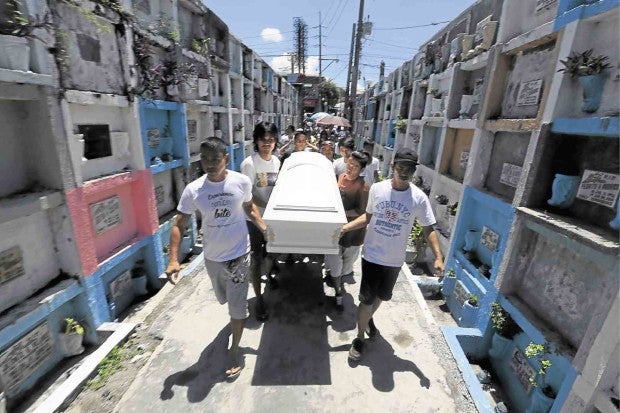 LAID TO REST Pallbearers carry the coffin of pedicab driver Michael Siaron, an alleged drug pusher who was gunned down by motorcycle-riding men in Pasay City on July 23. Siaron was buried at the Pasay Public Cemetery on Wednesday. (See story in Metro, Page A10.) RAFFY LERMA

“Ang sakit-sakit (It’s too painful)!” an inconsolable Jennilyn Olayres cried as her husband Michael Siaron—who was gunned down by motorcycle-riding men who left a cardboard sign tagging him as a pusher—was laid to rest on Wednesday at the Pasay City public cemetery.

As mourners took their leave, Olayres stayed on for a few minutes, her eyes filled with sorrow as she looked at Siaron’s niche, one among the rows of apartment tombs.

“I don’t know how to go on from here. It’s difficult to accept [he’s gone]” Olayres told the Inquirer earlier this week. A photo of her cradling Siaron’s body came out on the Inquirer front page a day after he was shot on July 23. As the image went viral, it drew attention to the increasing number of extrajudicial killings in the country.

Before the funeral, a Mass was held at Our Lady of Fatima Parish but there were no eulogies. Olayres shunned media interviews on Wednesday, her relatives worried about what she might say in her grief-stricken state.

“Baka may masabing masama sa gobyerno, ma-Duterte (She might say something against the Duterte administration and get killed),” one of them remarked.

“Eto ang tinatawag na pagbabago—bawas tao (This is what we call change—killing people)!” a man shouted, referring to the President’s campaign promise of enacting genuine change.

Olayres’ sister, Joann, noted that President Duterte was irked by the photo published by the Inquirer.

“Drama-drama daw ng kapatid ko. Iiyak-iyak. Natural iiyak, mahal niya, asawa niya eh (President Duterte said my sister was too melodramatic because she was crying. Of course she would cry, she lost her husband whom she loved),” Joann told the Inquirer.

Joann remembered Siaron, or “Negro” as he was called, as someone who liked to make people laugh with his jokes.

Amid their grief over Siaron’s sudden death, his relatives are also wary. If Siaron and other people already judged as drug pushers by “cardboard justice” could be eliminated like flies, who knows who’s going to be next?