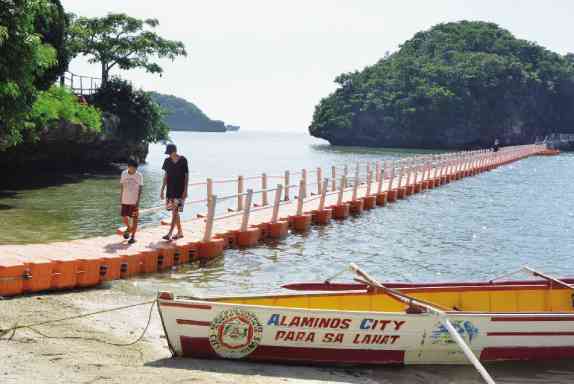 ALAMINOS CITY has discouraged “bangus” production in its waters because of fears it would pollute the Hundred Islands National Park. RAY B. ZAMBRANO/INQUIRER NORTHERN LUZON

Instead, the city’s waters would be devoted to the culture of the so-called janitors of the sea—tulya (oysters) and tahong (mussels)—“which clean the marine ecosystem,” Mayor Arturo Celeste said.

Celeste said the commercial feeds used in culturing bangus had polluted the seas, which could contaminate the waters in the Hundred Islands. Alaminos has 50 fish pens in the villages of Mona, Tanaytay and Cayucay.

Alaminos’ neighboring towns of Bolinao, Anda and Sual have flourishing bangus cage operations which dominate the province’s inland fish industry. But Bolinao and Anda are annually hit by fish kills.

This year, Celeste said he no longer renewed the permits of aquaculture operators in the city. He said he asked the city council to amend the ordinance regulating bangus production by encouraging operators to pursue oyster culture instead.

The mayor has advised bangus caretakers not to restock their pens anymore after they harvest the present stock.

Banning bangus culture in the city won’t affect the province’s bangus production because of a fish surplus in the district, he said.

Water pollution also has extended the period for culturing bangus, Maramba said. “I am willing to sacrifice my fish pens in Alaminos, provided the government has a better means of regulating inland fishing,” he said.