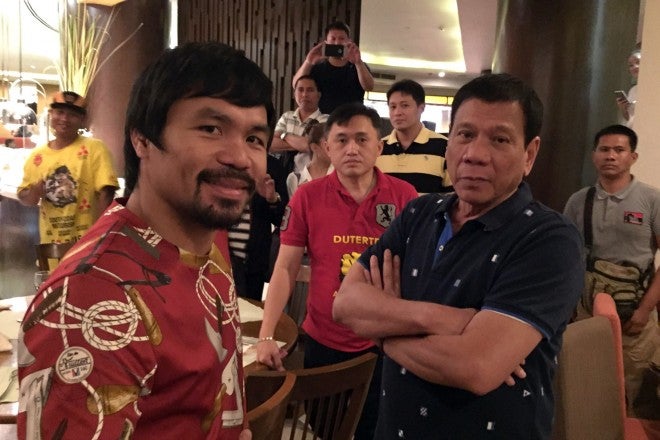 President Rodrigo Duterte made another push for the reimposition of the death penalty when he met Senator Manny Pacquiao in Malacañang Monday night.

Pacquiao said his one-on-one meeting with the President lasted about an hour. He said he sought the meeting to find out the President’s direction and how he could help the government in its fight against crimes and illegal drugs.

“Hinihiling niya sa taumbayan na ‘yung death penalty ay kailangang maipasa na para makatulong din (He is asking from the public for death penalty to be passed in order to help),” the senator told reporters on Tuesday, quoting the President.

“Gusto talaga niya na may death penalty at syempre ako rin, gusto ko rin (He really wants death penalty to be reimposed and of course I do, too),” Pacquiao said.

The senator also backed the government’s drive against illegal drugs, saying he was more concerned if the drug problems would not be resolved, and not on the sudden rise of alleged extrajudicial killings in the country since Duterte’s assumption in office.

Some of the drug suspects, anyway, he said, were killed by drug lords and not by law enforcers.

“Hindi naman ako nababahala (I’m not worried),” Pacquiao said when asked if he was not concerned about the spate of killings. “Nababahala ako dahil may mga anak ako, nababahala ako ‘pag hindi nalutas yung krimen sa droga; napaka-importante ‘yun (I’m concerned because I have children, I’m concerned if crime and drugs aren’t resolved; those are the most important).”

(Now, I realized that Duterte was placed as President because drugs are really rampant in the Philippines.)

(Maybe, in my opinion, if we had a different President and the campaign against drugs isn’t this strong, we might not know how big the problem of drugs is in the Philippines. Imagine, even in the corners of the villages, there are a lot of drugs, so if Duterte wasn’t President and drugs are still rampant, many people would lose their sanity because of drugs.)

Pacquiao insisted that the President and the police had not violated the law with their intensified campaign against crimes and illegal drugs.

(Like what I said, the President and the police force don’t want to break the law and they follow due process; and like I said, the ones they’re killing… the ones that the drug lords kill are their men because they can report to authorities.) JE/rga

Pacquiao for death penalty, against divorce