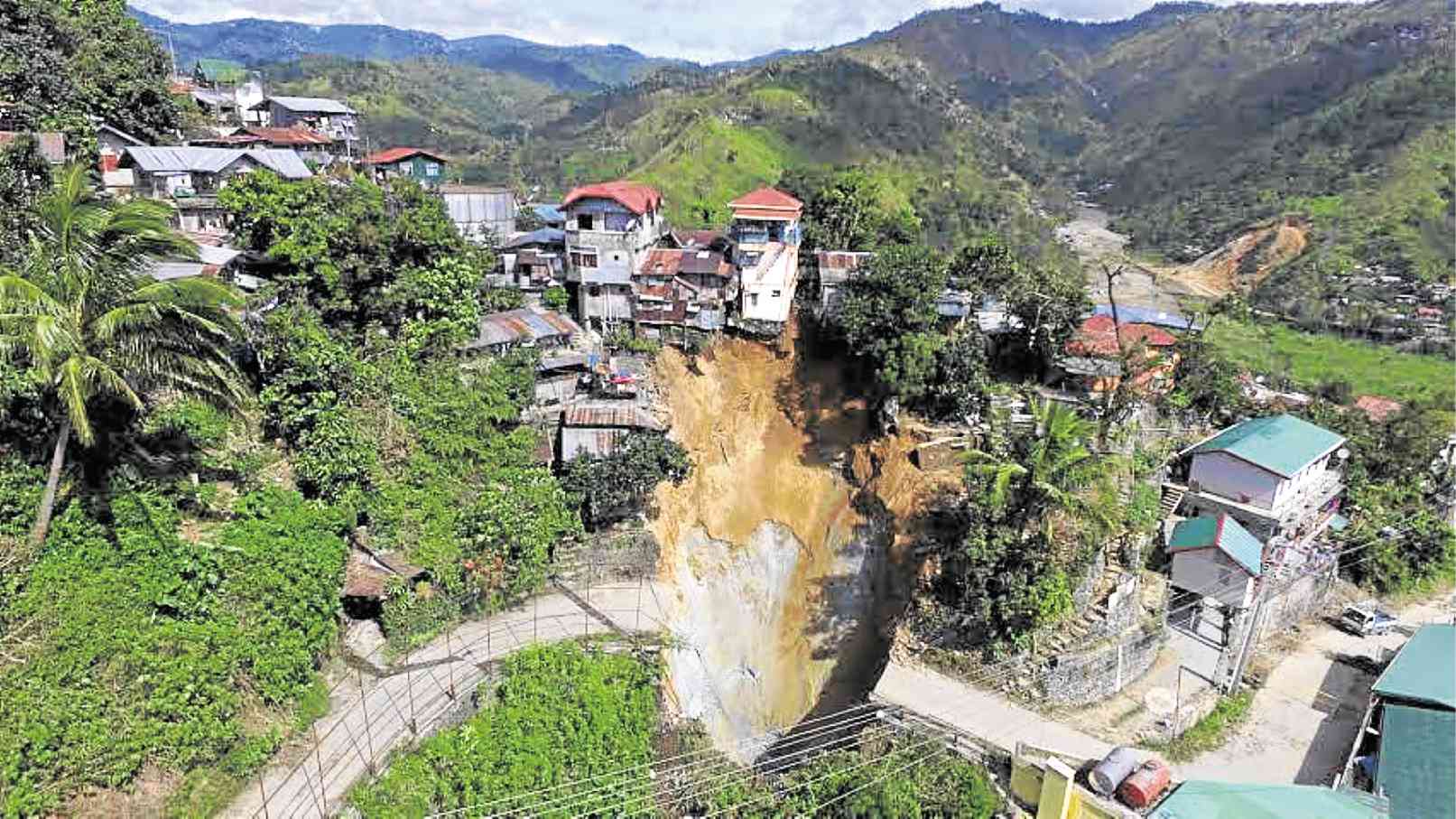 THIS 20-meter-wide sinkhole swallowed seven houses in the village of Virac in Itogon town in Benguet province last year. The provincial government has set aside funds to fill the pit to protect residents and property in the area. ELIZA CONSUL / CONTRIBUTOR

BAGUIO CITY—A 20-meter-wide sinkhole, which opened up and swallowed seven houses in the mining town of Itogon in Benguet province last year, is being filled with river soil and silt as a precautionary effort, more so with the onset of the monsoon season.

It would take 134 10-wheeler trucks to fill up the pit with 2,000 cubic meters (3,200 tons) of soil and silt that would be extracted from the Acupan River, according to Itogon Mayor Victorio Palangdan.

The first-class municipality classified a settlement in the sub-villages of Kamangaan and Upper Batuang in Barangay Virac as a danger zone, after portions of a road and a mountainside sank on Oct. 22, 2015, two days after Typhoon “Lando” (international name: Koppu) slammed the Cordillera region.

Palangdan said 43 families were told to leave their homes and settle at a relocation site being developed by the local government on land donated by a mining firm.

The Mines and Geosciences Bureau concluded in April that the huge hole was a natural phenomenon created by strong rains dumped by Lando. It reported that the Virac void was the result of a “piping gully” that developed when rainwater penetrated natural ground openings and man-made tunnels.

Tests conducted by a team of MGB geologists found geological weaknesses that could be traced to the 1990 earthquake that struck Luzon, the report said.

The hole at Virac, however, was due to piping, which geologists described as a form of underground soil erosion. The erosion takes the shape of a pipe that directs or channels water toward any form of exit.

“Abnormally high” rainfall on Oct. 19 last year appeared to have been the primary reason for the giant pit, the MGB said. According to a weather report, Lando dumped 775.4 millimeters of rain in the area on that day—an amount equivalent to a month’s rainfall.

Palangdan said the provincial government had taken charge of the refilling operations, as well as the rerouting of the Batuang Road which was eaten up by the pit. Refilling and the construction of a 30-meter road should be completed in October, he said.

The MGB declared the safety of the relocation site. But Palangdan said the municipal government must build an access road and put up water and electricity systems before families could rebuild their houses there.

The displaced families are now staying in houses of relatives.