44% of Filipinos do not want Charter change—Pulse Asia

Results of the poll, conducted from July 2 to 8, showed that 44 percent of the 1,200 respondents believe that the Constitution should not be amended for now.

On the other hand, 37 percent said they think the Constitution should be amended now as 19 percent remain undecided.

“The plurality sentiment among Filipinos (44 percent) is one of opposition to proposals to amend the 1987 Philippine Constitution at the moment—a view shared by virtually the same percentages of those aware of charter change proposals and those with a great deal/sufficient knowledge about the 1987 Philippine Constitution (both at 42 percent),” Pulse Asia said in media release sent Monday.

Compared to the last survey about Charter change, conducted in November 2014, those agreeing to constitutional revisions are now bigger in number (37 percent, from 27 percent in 2014) while those who oppose it have slightly declined (44 percent, from 49 percent almost two years ago). There are also fewer respondents who are undecided (19 percent from 24 percent). 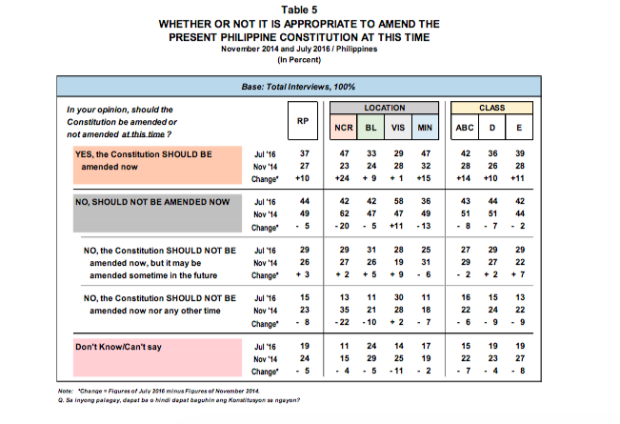 Majority of Visayas says ‘no’

The biggest opposition comes from Visayas where 58 percent said the constitution should not be amended right now. This is followed by the National Capital Region (NCR) and the Balance of Luzon (42 percent each). Coming in last is Mindanao with 36 percent saying they are against Charter change.

The trend is slightly similar to those backing the proposal with Mindanao and NCR leading the pack with 47 percent each, followed by Balance of Luzon (33 percent in favor) and Visayas (29 percent).

There are more people from the Balance of Luzon (24 percent) who said they “don’t know” if the Constitution should be amended as compared to those from Mindanao (17 percent), Visayas (14 percent) and NCR (11 percent).

The survey also showed that majority of Filipinos (73 percent) have “little” to “no knowledge” of the Constitution of the Philippines.

Many are also not aware of the plans to amend the constitution (41 percent aware and 59 percent not aware). This is unlike in 2014 when more people knew about it. 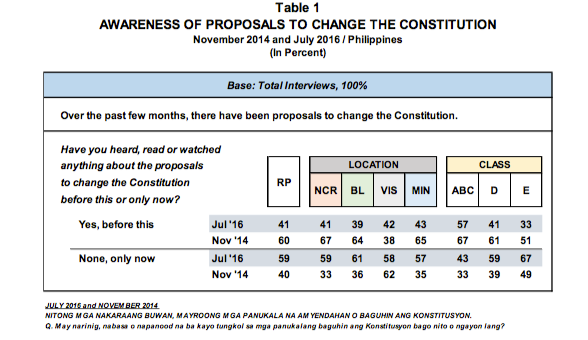 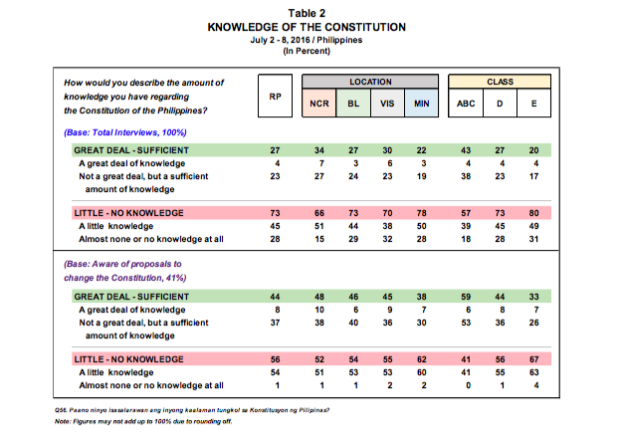 No to parliamentary system?

“It may be recalled that in February 2009, a small majority of Filipinos (59 percent) were not in favor of changing the country’s form of government to a parliamentary one – higher than the present figure (37 percent),” Pulse Asia said.

On the other hand, 39 percent of the respondents said they are in favor of shifting to a federal system of government. Thirty-three percent said they are not in favor while 28 percent are ambivalent.

“Support for a shift to a federal system of government is more notable among those with a great deal/sufficient amount of knowledge about the 1987 Philippine Constitution than among Filipinos as a whole (47% versus 39%),” Pulse Asia said. RAM 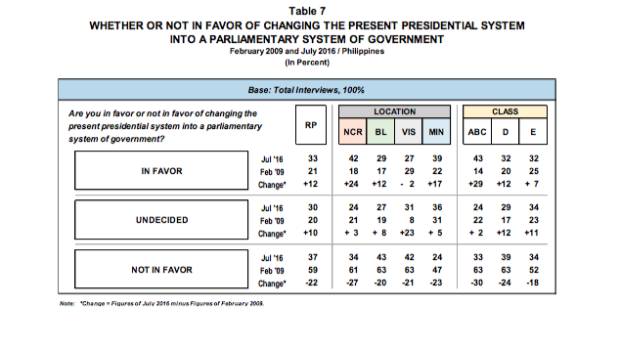 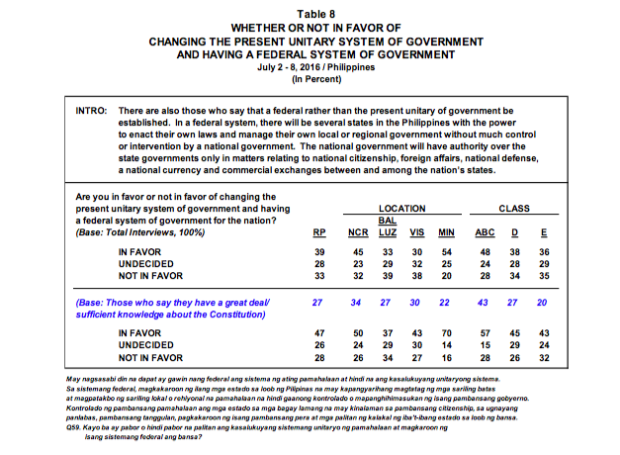