Congress, not President, has say on changing Charter — Drilon 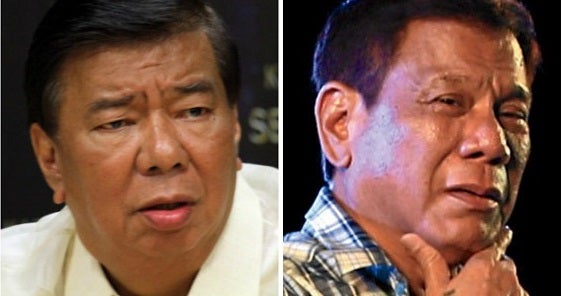 Senate President Pro-Tempore Franklin Drilon (left) said Congress had the sole authority on how the Constitution could be changed. He added that Congress did not need to seek the approval of President Rodrigo Duterte on the matter. INQUIRER FILES

Congress has the sole authority to decide on the mode of amending the Constitution, Senate President Pro-Tempore Franklin Drilon said on Monday.

“The mode of amending the Constitution, whether by Constitutional Assembly (Con-Ass) or Constitutional Convention (Con-Con), is the sole prerogative of Congress,” Drilon said in a statement.

But Drilon explained that unlike ordinary bills, a resolution calling for a review of the Constitution is not subject to the approval of the President.

“A resolution calling for a Con-Con or Con-Ass does not need the approval of, and cannot be vetoed by, the President,” he said, adding that the Filipino people would ultimately decide whether or not they would ratify the amendments to the Constitution.

“The amendments to the Constitution itself are not approved, and cannot be vetoed, by the President, but are submitted directly to the people for approval or rejection in a plebiscite,” the senator stressed.

Drilon said Congress should debate on the best mode to amend the Constitution, taking into consideration the views of all stakeholders, the President, and Constitutional and legal experts.

As the committee chair, Drilon vowed to give the resolution to amend the Constitution “the highest the priority.”

He said the committee would take it up as soon as the organization of the Senate was finalized and completed./rga