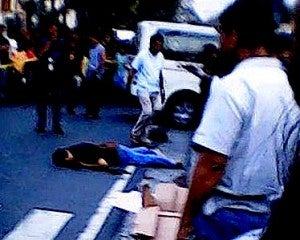 MANILA — A policeman was found dead on a vacant lot in Caloocan City on Friday.

The Caloocan police said the body of PO1 Ferdinand Allen Jaravata had a gunshot wound in the head, a nylon cord around the neck and a plastic bag wrapping the face when discovered on a vacant lot on Waling Extension, Barangay 175, Camarin.

Chief Insp. Alfredo Dulay, the community precinct commander in the area, said a concerned citizen alerted his unit about the victim around 6 a.m.

He said a sachet of suspected “shabu” (methamphetamine hydrochloride) was found on the corpse.

Jaravata was first identified based on the Philippine National Police ID card that was also found on the body. “We checked with PNP records and (found that) he is in active service’’ and assigned to the Eastern Police District, Dulay said.

Investigators have been doing further background checks on the victim — “if he was involved in drug activities” — to determine the motive for the killing and come up with suspects, the official added.  SFM