PNP chief: There are those higher than 3 drug suspects nabbed in city
By: Jaymee T. Gamil - Reporter / @jgamilINQ
Philippine Daily Inquirer / 10:40 AM July 30, 2016 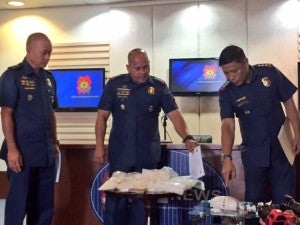 Eight kilos of shabu were recovered in the two operations, of which seven kilos came from Badron alone.

Badron was entrapped around 3:10 p.m. on Amang Rodriguez Avenue, Marcos Highway, Pasig City. The drugs were found when his vehicle (ABM 8809) was searched.

Bansil and Malaco were arrested along BCDA C5 Road in Taguig City, where they were found keeping a kilo of suspected shabu and a gun in their vehicle (ABH 2534).

Sapitula described the three suspects as “bigtime traders and distributors of high-grade shabu in the eastern part of the Metro Manila and nearby cities.”

But for the Philippine National Police chief, Director General Ronald De la Rosa, they were only “players” in the drug trade. “We know there are those higher than them.”

Chief Supt. Oscar Albayalde, director of the National Capital Region Police Office, has estimated that “shabu” currently sells in the streets at P2 million to P5 million per kilo.  SFM

Read Next
New cyberattack hits Democrats, Clinton camp reports intrusion
EDITORS' PICK
Alex Eala wins Grand Slam on Independence Day: ‘I hope I made my contribution to the country’
Kai Sotto continues to inspire Filipinos by sharing his passions and stories with Smart Prepaid
Ahead of ONE: Full Blast II, Mongkolpetch warns Elias Mahmoudi: ‘Watch out for my fists’
G7 rivals China with grand infrastructure plan
PNP, PDEA destroy P25.8M worth of marijuana in Kalinga
Rare earth metals at the heart of China’s rivalry with US, Europe
MOST READ
Groups slam Duterte ‘surrender’ to China
PH logs 7,302 new COVID-19 cases — DOH
1Sambayan names 6 choices to pit vs Duterte’s anointed in 2022
MVP steps into new role as top PLDT cheerleader
Don't miss out on the latest news and information.