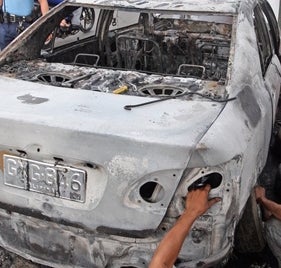 ILOILO CITY — Unidentified men on Thursday evening commandeered and burned a taxi unit owned by a businessman tagged by authorities as a drug lord in Iloilo.

This was the second “Melvin” taxi unit burned this month by unidentified men.

The Melvin taxi fleet is owned by Melvin Odicta, who was tagged by the Philippine Drug Enforcement Agency as the head of one of the two main drug groups operating in Western Visayas.

Odicta has repeatedly denied the allegation. He is facing criminal charges for leading a group of men who allegedly tried to forcibly enter radio station Aksyon Radyo Iloilo, which has been airing reports and commentaries against illegal drugs.

The brand new Isuzu Crosswind taxi unit was found burning along a road in Barangay Cabugao Norte in Sta. Barbara around10:45 p.m.

The vehicle had been destroyed by the time the fire was put out by firefighters, Senior Insp. Wilmar Bolivar, officer in charge of the Sta. Barbara police station, said.

The taxi was found in an area near rice fields and far from houses, Bolivar said.

Taxi driver Ferdinand Josar told investigators that he picked up a male passenger at the junction of E. Lopez and Jalandoni Streets in Iloilo City around 10 p.m.

The passenger asked to be taken to the bus and jeepney terminal in Barangay Ungka II in the neighboring town of Pavia.

But when they were near their destination, the passenger asked Josar to pick up another man.

Once the other passenger got near the taxi, he poked a hand gun at Josar and told him to move to the front passenger seat and “cooperate.”

The two passengers then covered his eyes with packing tape and tied both his hands at the back before one of the men drove the vehicle, said Senior Insp. Rey Cordero, deputy chief of the Pavia police station.

The men left Josar along the circumferential road in near Barangays Ungka II and Pandac in Pavia.

They did not take his money and other personal belongings.

On July 5, two men also commandeered a Melvin taxi unit in Iloilo City. The vehicle was later found burned down in Oton town.

The two also left the taxi driver unharmed and did not take his cellphone and earnings amounting to about P4,000.  SFM/rga