Duterte willing to resign if gov’t shifts to federalism 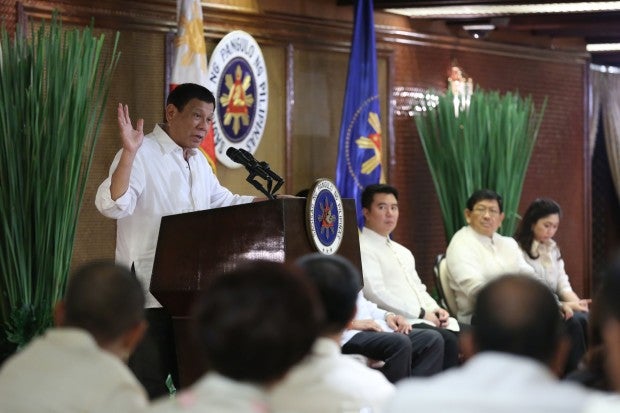 President Rodrigo Duterte urges city mayors and provincial governors to intensify their anti-illegal drug campaign in their respective cities and provinces during his keynote speech in the oath-taking ceremony for the newly elected officials of the League of Provinces of the Philippines and League of Cities of the Philippines at the Heroes’ Hall of Malacañang Palace on July 27. KING RODRIGUEZ/PPD

President Rodrigo Duterte is willing to step down from his post if the shift to a federal form of government takes effect during his term.

“Two years, if you have the federal setup, I will resign as President. Three years, sibat ako. Four years, ay salamat,” Duterte said in his speech during an event with the League of Cities and Provinces at Malacañang on Wednesday night.

The President said it would be best for the Philippines to copy the French setup where there is a president and a prime minister.

Duterte said he could offer to resign as soon as the shift to a federal government was ready.

“I they can shorten the proceedings, you have a Constitution that’s federal in three or two years, then you have to elect a president. Of course that would automatically, legally mean hindi na ako pwede, so I will offer to resign,” he said.

Federalism was an integral part of the campaign of Duterte during the elections, saying the system would empower local governments and pave the way for prosperity in the regions.

During his first State of the Nation Address on July 25, Duterte said he was willing to resign if a federal form of government would be adopted.

He added he would no longer run for President if the system would push through.

The President said he was doing his work for love of the country, although he admitted he was unhappy with the present set-up.

“Ako, nagtratrabaho ako. Do not feel short-changed. My will to work is there, but if you ask me if I am happy, I am not,” he said.

“What’s really pushing me to move is my love for my country,” he added./rga