From ‘focused to funny,’ Duterte lifts mood at security meeting 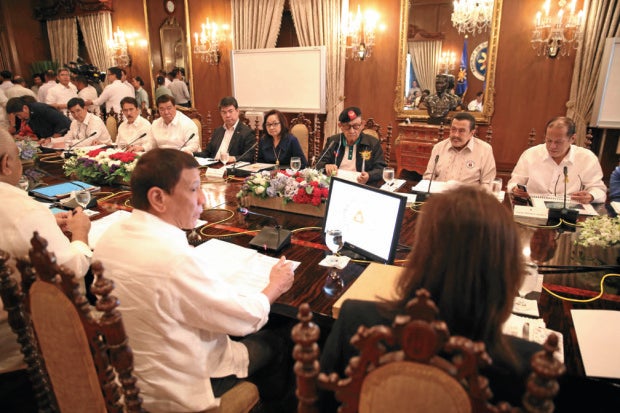 Even at a high level security meeting, President Rodrigo Duterte managed to joke about how beautiful Vice President Leni Robredo is.

Since they were prohibited to talk about the details of the National Security Council (NSC) meeting in Malacañang Wednesday, Justice Secretary Vitaliano Aguirre II only described the atmosphere as good and happy.

“Nagbibiro si President (Rodrigo) Duterte (President Duterte cracked a joke),” Aguirre said in an interview at the Senate on Thursday, after taking his oath at as a new member of PDP-Laban at the office of Senate President Aquilino “Koko” Pimentel III.

READ:  ‘No tirade, only exchange of wisdom’ at meeting of Presidents

Senate Minority Leader Ralph Recto attested how Duterte transformed himself from being focused to being funny during the NSC meeting.

“He can be focused one moment and funny the next. It is both educational and entertaining. This guy’s thought process is good. He knows when to summarize points and where to shepherd the discussion,” Recto said in a statement.

“To break the monotony of long meetings, yesterday was almost five hours long, he has this comedian’s gift of timing on when to crack jokes. He gave great inputs, and with his humor, in-house entertainment as well,” he said.

But Recto said Duterte’s decision to invite the past presidents as well as members of the minority only showed that the latter was a practitioner of “inclusive politics.”

“I can sense that he likes to crowdsource ideas. Judging by how he appreciated the views shared by the attendees yesterday, we can expect more groups to be convened as his sounding boards,” he said.

“One of which, I am sure, is the Legislative-Executive Development Advisory Council (LEDAC) which was mothballed in the past six years. He can revive this as a productive forum to discuss policy,” the senator added. CDG