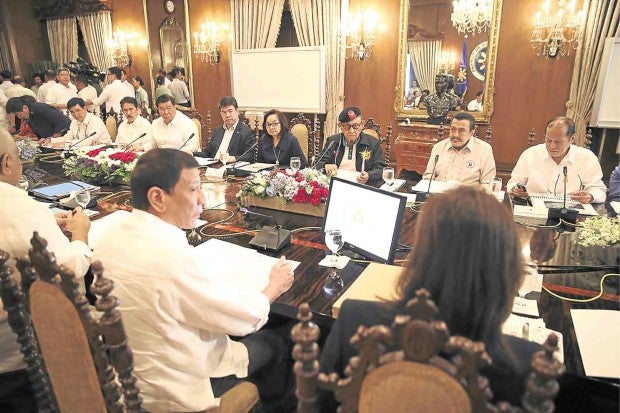 DIGONG AND FOUR PREDECESSORS President Duterte presides over his first National Security Council meeting to discuss issues, including the ruling of the UN-backed arbitration court in favor of the case the Philippines brought against China in their dispute over the West Philippine Sea. In attendance are Mr. Duterte’s predecessors—(from left) former Presidents Gloria Macapagal-Arroyo, Fidel Ramos, Joseph Estrada and Benigno Aquino III. PRESIDENTIAL PHOTOGRAPHERS DIVISION

In his first National Security Council meeting attended by four predecessors, President Duterte on Wednesday outlined major initiatives he was undertaking—the war on illegal drugs, peace talks with communist and Moro rebels and the territorial disputes with China.

The meeting was continuing four hours after it began at 3 p.m., according to presidential spokesperson Ernesto Abella.

Abella said Mr. Duterte expected support from his predecessors for his programs.

“I mean, at the end of the day, they are all Presidents of the Philippines. It would be a cooperative venture,” Abella said in a press briefing.

He said that aside from the war on illegal drugs, peace talks with communist and Moro rebels and planned dialogue with China on territorial disputes in the South China Sea, the meeting also tackled Mr. Duterte’s proposal to shift to federalism.

In his State of the Nation Address (Sona) on Monday, Mr. Duterte said he was willing to cut short his term if a constitutional convention would agree on his program to adopt the federal system of government. Leila B. Salaverria