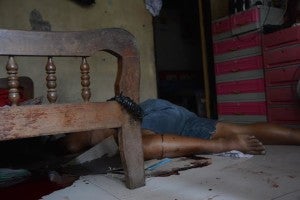 Former SPO1 Vicente Moulic was killed in a Monday gun fight with policemen during a buy-bust operation at his house in Sitio Tambac Melag, Pantal village in Dagupan City. (RAY B. ZAMBRANO/INQUIRER NORTHERN LUZON)

DAGUPAN CITY – A former policeman was killed in a shoot-out with law enforcers during a buy-bust operation on Monday (July 25).

Since July 1, four suspected drug dealers have been killed in this city after engaging arresting policemen. Eight others were killed by unknown assailants.