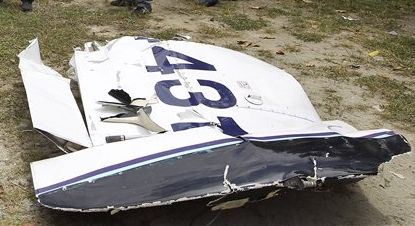 The Court of Appeals (CA) affirmed the decision of the Office of the Ombudsman clearing  a pilot examiner of criminal and administrative liability over the plane crash that killed Interior and Local Government Secretary Jesse Robredo and two others.

In a 12-page decision, the CA 15th division through Associate Justice  Jhosep Lopez dismissed the petition filed by the Civil Aviation Authority of the Philippines (CAAP) that sought a reversal on the July 31 and 13 orders by the Office of the Ombudsman that dismissed the administrative and criminal complaints filed against CAAP’s Flight Operations Control Inspector 1 Nomer Christopher Lazaro.

Lazaro conducted the pilot proficiency flight check test (PPFCT) on Capt. Jessup Bahinting on his  application for renewal of pilot license. Bahinting was the pilot of Piper Seneca Plane that crashed into the waters of Masbate coast and sank into the sea after one of its engines malfunctioned.

Robredo, Bahinting and Nepalese pilot-trainee Kshitiz Chand were killed in the accident. Only Robredo’s aide June Abrazado survived the incident.

The CA said there was no grave abuse of discretion on the part of the Ombudsman when it dismissed the complaint against Lazaro.

Lazaro allegedly submitted fraudulent documents to make it appear in the PPFCT report that he conducted a checkride on Bahinting even when no actual flight test on one engine inoperative emergency procedure was performed.

But the appeals court said CAAP failed to provide the rules and regulations that require a checkride  on one engine emergency procedure must be done exclusively through an actual flight.

The court pointed out that a checkride on one engine inoperative emergency procedure can be performed through flight simulation pursuant to Civil Aviation Regulations .

READ: Leni douses speculation on Jesse’s death: It was an accident

The appellate court also noted that even in its Circular 02-012 on Skill Test Standards for Commercial Pilot-Aeroplane Multi-Engine also recognized the use of flight simulator to test the pilot’s proficiency on one engine inoperative emergency procedure.

“The Ombudsman correctly ruled that while Lazaro did not conduct an actual flight test on one engine inoperative emergency procedure, he, however  proved that the same was performed through flight simulation,” the appeals court said.

“It is apparent that what the CAAP Regulations require is merely to conduct a simulated one engine inoperative emergency procedure. It does not mandatorily require the pilot examiner to perform an actual engine stoppage or to inoperate any engine while in actual flight as a pre-requisite in the renewal of pilot license,” the CA ruled.

The appeals court also added that CAAP failed to prove that it was Lazaro was mandated by law to submit a flight plan when in fact, the Civil Aviation Regulations provide that the said duty rests with the pilot-in-command.

“In this case, no substantial evidence exists to prove the disposition of private respondent to lie, cheat, or defraud. Although there is no evidence of actual flight performed, public respondent aptly held that private respondent was able to show that the grades as appearing in the PPFCT Report was based on the simulated checkride by him,” the CA held.

“In light of the foregoing, we find dismissal of the administrative complaint to be supported by substantial evidence, thus, giving us no cogent reason to overturn the same,” it added.