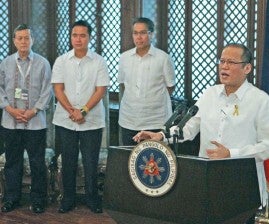 A mixture of sadness and dismay was what President Aquino felt after investigators released their report mainly blaming the pilot for the Aug. 18 plane crash that killed Interior Secretary Jesse Robredo and two others, including the pilot himself.

A special investigation committee cited various errors by Capt. Jessup Bahinting, the most flagrant being his failure to turn back the plane to Cebu after an engine malfunctioned, showing a lack of experience to handle an emergency situation.

The committee also blamed engine failure and poor management by AviaTour’s Fly’n Inc., including Bahinting’s supposed connivance with officers of the Civil Aviation Authority of the Philippines (CAAP) for the issuance of a certificate of airworthiness without proper tests.

The plane crashed into the Masbate Sea.

Mr. Aquino has informed Robredo’s widow, Leni, and her three daughters of the findings.

“When I first read the initial results of the investigation, I felt a mixture of sadness and dismay,” Mr. Aquino told reporters.

“The pieces of evidence pointed to one thing: If some people did their job, if the rules of the industry were followed, if those involved were only faithful to their obligations, the tragedy could have been avoided,” he said.

Option of turning back

Mr. Aquino said Bahinting lacked the proper experience and training for “one-engine inoperative emergency” even though some said he was an expert pilot.

“It’s clear he failed to fly the plane safely on one operating engine. Apart from this, 23 minutes after taking off from Mactan, he became aware that the engine malfunctioned, but instead of turning back, they flew ahead to Naga,” he said.

“They were airborne for 70 minutes before the plane crashed. That means, if they had turned back immediately to Mactan, there was a high possibility the accident could have been avoided,” Mr. Aquino said.

The ill-fated Piper Seneca took off from Cebu International Airport for Naga at around 3 p.m. At about 4:25 p.m., it crashed into the waters of Masbate, killing Robredo, Bahinting and his copilot Kshitiz Chand, from  Nepal.

Robredo’s aide, Senior Insp. June Abrazado, survived, swimming through a hole in the plane to shore.

The committee, chaired by Capt. Amado Soliman Jr., cited several key errors by the pilot, but the most flagrant was: “When the right-hand engine became problematic, he continued to fly away from Cebu instead of turning back.”

While one engine had problems, both engines were still functioning and continued to do so for 30 minutes. And Cebu has the most modern air navigation and communication equipment, the longest runway, the widest airstrip, the most advanced and most trained crash, fire and rescue equipment, and personnel, it added.

“Mostly it was the pilot’s inability to control that aircraft on an emergency situation where he lost one engine,” Soliman said.

The other errors cited by the panel were:

“According to the experts, this contributed to the ‘drag’ that slowed down the plane until this could no longer be controlled and it crashed,” he said.

Soliman said: “Among airline pilots, single engine is just a routine maneuver. I don’t know why in general aviation, there seems to be a problem. Even if you lose an engine—a twin or a multi-engine aircraft—it doesn’t have to end in an accident. But it will end in an accident if the pilot lacks the training to handle that aircraft during an emergency situation flight having lost one engine.”

The committee concluded that the right-hand engine experienced “hard starting” after the installation of an overhauled propeller, but this was not recorded in the aircraft logbook.

Specifically, two screws that held the idler gear shaft in place had “material failure.” The bent edge of the lock plate that was supposed to lock the screw in place was also found broken.

It noted that AviaTour’s was not certified by the aircraft manufacturer and by CAAP to conduct maintenance work on the aircraft.

The committee found flaws in the management of AviaTour’s, including the improper issuance of an airworthiness certificate.

Airworthiness inspector Fernando Abalos approved the test flight permit for renewal of the airworthiness certificate for the plane on Jan. 7, 2012,  but there was no record in the aircraft logbook of the test flight, the committee said.

A check with Mactan airport log showed no flight plan for the plane was filed on that day, it added.

Capt. Federico Omolon, AviaTour’s flight instructor, testified that Bahinting asked him to sign the flight test report even though he did not fly the plane on Jan. 7, the committee said.

On Jan. 17, Abalos endorsed the application for airworthiness certificate renewal and an entry in the database showed the documents for such a renewal had been reviewed by Abalos. On Feb. 2, the certificate of airworthiness was released to Armand Gozum of AviaTour’s, but this was predated to Jan. 7.

“Captain Bahinting connived with airworthiness inspector Abalos to expedite the processing and approval of the certificate of airworthiness,” the committee concluded.

“It was clear that they committed deception and fraud. The cost: The lives of three people,” the President said. “This is a symptom of an anomaly in a system that has long prevailed, and which we are now addressing. We will not allow this system to continue. That’s why evidence would continue to be gathered to hold accountable those who have shortcomings on the part of AviaTour and even the CAAP.”

Mr. Aquino ordered an audit of  the permits and licenses issued by the CAAP and the strengthening of the rules for the operations of  flying schools and airtaxis.

“We don’t want this tragedy to happen to anyone,” he said. “Jesse would want us to learn from the tragedy that befell him. Let’s not allow his passing to come to naught.”

CAAP Director General William Hotchkiss III ordered the creation of a special investigating committee to look into the administrative and criminal culpabilities of CAAP and AviaTour’s personnel.

“AviaTour has been suspended but not its personnel, not yet. We need to go through due process,” Hotchkiss said.