Senator Alan Peter Cayetano, who earlier expressed a desire to seek the Senate presidency, was the only senator absent during the voting.

After losing the vote, Recto automatically became the Minority Leader. He will be joined by Escudero and Trillanes.

Pimentel, president of PDP-Laban which is now headed by President  Rodrigo Duterte, earlier promised to lead an “activist Senate.”

In a speech after his election, Pimentel  said it was “greatly gratifying” that for the first time in the  history of the country,  the President and the new leaders of the Senate and the House of Representatives were all from  Mindanao.

He spoke while the House was still voting for the next Speaker, who was expected to be Davao Del Norte Rep. Pantaleon “Bebot” Alvarez.

“It had never been this way before, my dear friends,”  Pimentel said. “In fact, for a long time, the  people of Mindanao have felt excluded from the center of political power that defined policies and programs for the progress and  development of  the nation.”

“Now, history seems to be making up for all those  times of exclusion. And it is now mandating that the two main branches of our tripartite governmental setup, namely, the executive and the legislative departments be led  by individuals from Mindanao.”

“Should that circumstance, then, be a source of pride?” the senator asked. “Forgive me, my dear friends, if I say, ‘Yes.’ Because at the very least, it reassures our fellow Mindanaonons  that we are, after all, truly at par with the rest of the country in matters of public service.” 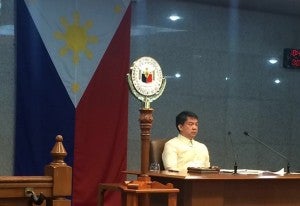 Despite this,  Pimentel  assured his colleagues that he would be fair in carrying  out his mandate as Senate President.   He  also gave the assurance that “fairness”  would be the guiding  principle of the  program of change that he and the majority of senators agreed upon.

This program  of government, he said, included  the all-out search for peace, the adoption  of a federal system  of government, an all-out war against crime, drugs, and corruption, tax reforms, the strengthening of the rule  of law and the justice system,  sustainable and inclusive economic growth, quality education and health care,  among others.

Pimentel also offered his hand of friendship and camaraderie to those whom he said disagreed with the current majority in the Senate.

“Let me offer my  hand of friendship and camaraderie, with the assurance that in the running of the affairs of our institution, we shall ever be guided by the democratic principle that even as the majority rules, the rights of the minority will always be respected pursuant to our promulgated rules, clear precedents, and well established practices,” he said.
“And as I have said earlier, I will be fair to all,” Pimentel added.

Duterte Youth attempts to rally inside UP; students, school officials block them