All requests for info to be acted upon in 15 days; DILG encouraged to implement FOI in local government units
By: Nico Alconaba - Bureau Chief / @inqmindanao
Inquirer Mindanao / 09:12 AM July 25, 2016 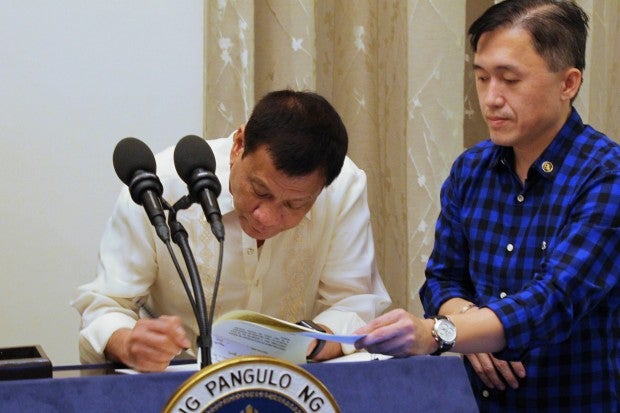 President Rodrigo Duterte signs the executive order on Freedom of Information in the executive branch of the Philippine government. (PHOTOS FROM MARO-PCOO)

DAVAO CITY – Finally, the public has access to information on matters relating to the running of the executive branch of the Philippine government.

President Duterte on Saturday night signed the executive order on Freedom of Information as he promised more than a month ago.

“We expect that corruption will be lessened with this, especially in the executive department,” Presidential Communications Operations Office Secretary Martin Andanar said in a news conference here Sunday morning.

Andanar said the executive order would “give an unimaginable access to government information, access that we never had before.”

“The outcome of this is really to lessen or end corruption,” he said.

The EO covers all government offices under the executive branch, including departments, bureaus, government-owned or controlled corporations, and state universities and colleges.

Andanar said local government units have been “encouraged to follow” the EO.

The EO also said: “Every Filipino shall have access to information, official records, public records and to documents and papers pertaining to official acts, transactions or decisions, as well as to government research data used as basis for public-development.”

Andanar said even “the ordinary Juans and Marias can now have access to information.”

But there are also exceptions. The EO said “access shall be denied when the information falls under any of the exceptions enshrined in the Constitution, existing law or jurisprudence.”

The Department of Justice and the Office of the Solicitor General were tasked to make the list of exceptions, which will be submitted to the President.

The EO also mandates all public officials “to file and make available for public scrutiny” their Statements of Assets, Liabilities and Net Worth.

But access to public records will not be as easy as going to a government office to sift through documents as one still has to make a formal request to get access.

The EO said the government office would respond to the request “as soon as practicable but not exceeding 15 working days from the receipt thereof.”

Except for reproduction costs, all requests will be free of charge, the EO said.

Government workers who fail to comply with the provision of the EO may face administrative and disciplinary sanctions.

Andanar said the EO on FOI “will strengthen our right to information as written, as inscribed in our 1987 Constitution.”

He said the signing of the EO on FOI was delayed because of some revisions it went through.

“Most were inclusions,” he said.

“There was a small delay, but it was a very short delay compared to the 29 years of waiting,” he added.
SFM