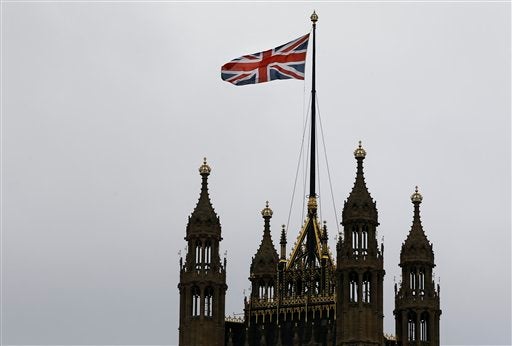 The Union flag flies above Parliament in London. AP

LONDON, United Kingdom — Britain’s finance minister warned Brexit would cast a “shadow” over the world economy but said he was eyeing a free trade deal with China in interviews with the BBC and Sky News on Sunday.

Speaking on the sidelines of the G20 meeting of leading world economies in Chengdu, China, Philip Hammond told Sky that the vote to leave the EU was “not the only shadow the world economy faces”.

“There is going to be uncertainty about the outcome hanging over the world economic outlook for perhaps the next couple of years,” Hammond said.

“At the same time there are very exciting opportunities opening up with China, with Australia, with India, and with many other countries” once Britain has withdrawn from the EU, he said.

Asked by the BBC if he could envisage a free trade deal with China, he said: “Definitely I could see such a thing.”

“We already have a strategic partnership with China… Once we are out of the European Union then I have no doubt on both sides we will want to cement that relationship into a firmer structure in a bilateral way,” he said.

G20 finance ministers on Sunday said the Brexit vote heightened risks for the world economy and vowed to use “all policy tools” to boost growth.

China President Xi Jinping before the referendum had said that he hoped Britain would remain in the 28-nation bloc to promote the “deepening development of China-EU ties.”

Senior figures from some of Britain’s biggest financial services companies, including HSBC, Virgin Money, the London Stock Exchange and Standard Life were travelling with Hammond.

Prime Minister Theresa May also discussed a trade deal with Australia in a phone call with Prime Minister Malcolm Turnbull earlier this month.

Foreign Office junior minister Alok Sharma was also travelling to India on Monday on his first visit since his appointment.

“Britain is open for business and thriving on the world stage. We want the strongest possible relationship with India,” Sharma said.