Arroyo back to work in Congress for Duterte’s SONA 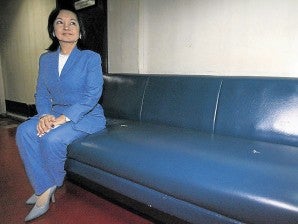 MANILA — Fresh out of a five-year detention, former president and now Pampanga Representative Gloria Macapagal-Arroyo will finally step back into the halls of Congress.

The Philippine Daily Inquirer learned that Arroyo has confirmed her attendance to the opening of the 17th Congress Mondaymorning (July 25), and the first State of the Nation Address (SONA) of President Duterte in the afternoon.

Former Presidents Fidel Ramos and Joseph Estrada, who has been reelected Manila City mayor, have also said they will attend Duterte’s SONA.

That leaves Benigno “Noynoy” Aquino III, who completed his term last June 30, as the only other living former President who will not attend the SONA.

Aquino pursued corruption charges against Arroyo in his six years in office.

However, Aquino’s campaign to clean up government met a serious setback last week after the Supreme Court ruled the prosecution failed to show evidence that Arroyo, in approving the disbursement of P366 million worth of funds from the Philippine Charity Sweesptakes Office (PCSO) for anti-terrorism activities, committed plunder.

Meanwhile, Ramos has become a steady presence in most events of President Duterte who publicly credited the former Chief Executive to his rise to the presidency.

Ramos, 88, is now the government’s special envoy to China, becoming the oldest member of the Duterte administration whose senior posts are held by officials in their late 30s to 70s. SFM