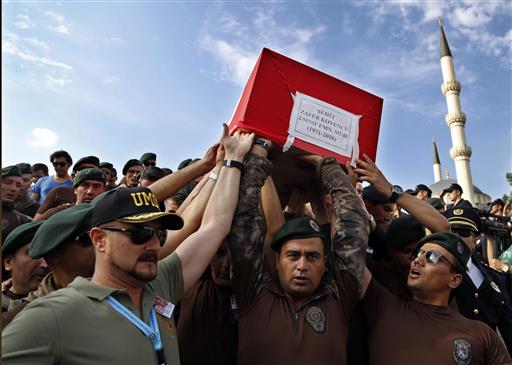 Turkish special forces policemen carry the coffin an officer who was killed last Friday during the failed military coup, during his funeral procession in Ankara, Turkey, Wednesday, July 20, 2016. AP

ISTANBUL — Turkey says it plans to hire more than 20,000 teachers to replace those who have been fired in a purge of suspected coup plotters in schools and other institutions.

Education Minister Ismet Yilmaz said late Saturday that the new teachers will replace state educators who have been dismissed as well as teachers in private schools with alleged links to Fethullah Gulen, a U.S.-based cleric accused by Turkey of directing a July 15 coup attempt. Gulen has denied any prior knowledge of the failed insurrection.

President Recep Tayyip Erdogan says 15 universities, 934 other schools and 109 student dormitories with alleged links to Gulen have been closed.

Turkey declared a three-month state of emergency to restore security following the coup attempt, which was foiled by loyalist security forces and pro-government protesters. TVJ