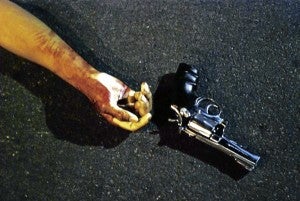 MANILA — A roadside checkpoint inspection early Friday morning turned into a shootout between the Las Piñas City police and two men riding tandem on a motorcycle, with the latter two ending up killed in the clash and their belongings yielding signs of their involvement in illegal drugs.

The two fatalities, 27-year-old Joven Dabu and his still unidentified companion, were initially flagged down by officers of the Las Piñas’ Tactical Motorcycle Riders Unit (TMRU) at around 3 a.m. on Naga Road because their motorcycle had no plate and both men were not wearing helmets, said Senior Supt. Jemar Modequillo, the Las Piñas police chief.

Instead of stopping, the two sped off, prompting police to chase after them. When they reached C-5 Extension, one of the two victims allegedly pulled out a gun and shot at the apprehending officers, who quickly retaliated, Modequillo said.

Dabu, a Nueva Ecija resident, and his companion were killed on the spot, the police chief said. A .38-cal revolver, a .45-cal pistol and six plastic sachets containing suspected shabu (methamphetamine hydrochloride) were recovered from the two men.

Police have yet to identify Dabu’s companion, as well as establish the two victims’ involvement in the illegal drug trade.  SFM