Pacquiao can fight, but only between Senate rounds | Inquirer News
Close
menu
search

Pacquiao can fight, but only between Senate rounds 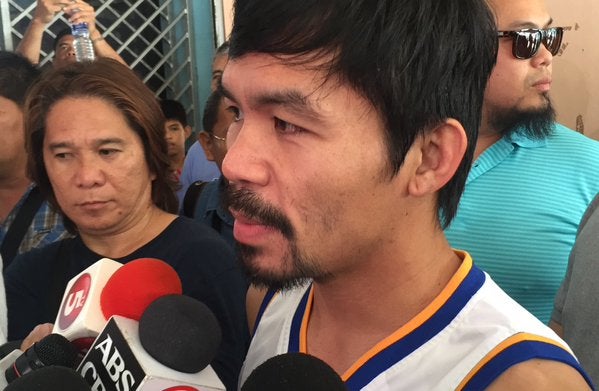 As long as he could perform his duties as legislator, Sen. Manny “Pacman” Pacquiao may go back to the boxing ring.

Senate President Franklin Drilon yesterday expressed his support for Pacquiao’s reported plan to go back to boxing, confirming for the first time that the newly-elected senator had sought his permission to fight again.

“He asked me if he can box. I said ‘there’s nothing to prevent you, but you can do it in a manner that will not interfere with your job as a senator because you will be severely criticized.’  And so I said ‘you can box during the break,” said Drilon of the lawmaker in a Senate forum yesterday.

Pacquiao was notoriously absent during his stint as Sarangani representative in the last Congress.

The schedule of the 17th Congress has yet to be finalized, but the Senate usually takes a brief break between October and November. Pacquiao usually trains for eight weeks for his bouts.

The senator, who attended a single session of Congress and had 16 absences “without notice” in the final session of the 16th Congress, then denied that he was planning to take a leave from the Senate just so he could fight.

In a statement, he said “my priority is my legislative work,” backing up his earlier vow to score a “perfect attendance” in his foray into the national legislature.

—while Congress is on recess so he won’t have to disrupt his legislative work.

Drilon said he would hold Pacquiao to his promise, adding that a senator with any other profession may pursue his or her job while being a member of Congress.

However, he vowed to be the first one to call Pacquiao out if he fails to deliver on his promise.

“I hold him to his commitment that it will not be at the price of neglecting his duty as a senator. I’d be the first one to criticize him if he does that. But I will support his decision to exercise his profession,” Drilon said.