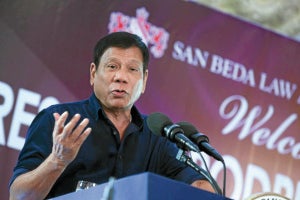 ISABELA CITY, Basilan – We have to stop this war.

This was the message of President Duterte to some 300 soldiers, policemen, internally displaced people and local government officials here on Thursday afternoon.

It was Mr. Duterte’s first visit to a province in the Autonomous Region in Muslim Mindanao since assuming the presidency on July 1.

“I don’t see anything good coming out of this war. For the sake of our children, we have to stop this war,” the President said.

Mr. Duterte vowed to “find ways to resolve the problem.”

The President, clad in white polo shirt and blue jeans, arrived in a helicopter at the 104th Army Brigade headquarters in Barangay Tabiawan here.

Security was so tight that journalists were not allowed to take videos and audio recording during the visit.  But the Philippine Daily Inquirer got hold of an audio recording from one of those who attended the meeting with Mr. Duterte.

“I know the problem here, and I assure you that I will find a way to end the conflict here,” the President said.

Basilan is known as home to the Abu Sayyaf bandit group.

Some 60 kilometers away, in the towns of Tipo-Tipo, Unkaya Pukan and Al Barka, government forces are fighting the bandit group.

Al Barka mayor Darussalama Ladjid said although there was no actual firefight on Thursday, the bandits positioned themselves in a hilly part, giving them an advantage against government forces.

“That is the reason why we want them flushed out from that high ground,” Ladjid said.

Ladjid said the ongoing operations against the bandits have already damaged their mosque and displaced more than 4,000 individuals.

“People are afraid to return because Abu Sayyaf will kill them,” he said.

In nearby Ungkaya Pukan town, Mayor Jomar Maturan said classes and economic activities have been put to halt for more than two weeks now.

Tan said a soldier was also killed while 18 others were wounded.

“We have to stop this war. If we cannot stop it, this one I will repeat in my SONA (State of the Nation Address), do not hate anymore,” the President said.

“Wag mong dagdagan sa puso mo ang galit. (Don’t fan the anger in your heart) If we cannot stop fighting, do not hate anymore,” he said.

The President did not specify the rebel group his message was directed to, but he did mention the Abu Sayyaf at one point.

Four rebel groups are in Mindanao.  The National Democratic Front, representing the Communist Party of the Philippines and its rebel army, the New People’s Army, is set to resume peace talks with the Philippine government in Oslo, Norway, on August 20.  The Moro Islamic Liberation Front has signed a peace agreement with the Philippine government but its implementation has been stalled over the refusal of Congress to pass the Bangsamoro Basic Law. The Moro National Liberation Front signed a peace agreement way back in 1996 but the faction led by MNLF founder Nur Misuari, disgruntled by the pace of the agreement’s implementation, has gone back to war. The Abu Sayyaf bandit group postures as an extremist terror group with ties to Al Qaeda and now to ISIS and has been mounting attacks and kidnappings since 1995, when it first made its presence felt by attacking Ipil, Zamboanga del Sur. Recently, it beheaded two Canadian captives after Canada refused to pay ransom. 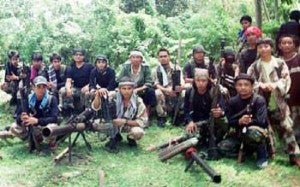 “I am pleading for peace, pati sa mga Abu Sayyaf — they have committed so many crimes, killing people,” he said, adding that government troops to go to Basilan as a “reaction” to the kidnapping and killing perpetrated by the bandit group.

“Troops come here because there are people being kidnapped, killed. It’s just the reaction of the government,” the President added.

Mr. Duterte again called on the Basileños to “take away hate because hate would drive and kill many.”

Lt. Gen. Mayoralgo dela Cruz, chief of Western Mindanao Command, said that at the command conference, the President told them “to just do your job.”

The President did not suggest anything, but expressed his “full trust and confidence over our work here,” Dela Cruz said.

Mr. Duterte also did not give directives on the operations against the Abu Sayyaf.

“He urged us to continue our normal operation. Kung kaya namin tapusin, e di mabuti (If we could finish mission, so much the better),” he said.

Dela Cruz said the more-than-an-hour meeting was “a combination of encouragement, seriousness, cordiality and some laughs.”

“Hindi ka aantukin, lively ang exchanges (You would not fall asleep; the exchanges were lively),” he said.

ARMM Gov. Mujiv Hataman, in a statement, said he promised the President that “the ARMM government will help the evacuees and assist in the development of the province.”

President Duterte is also inviting the LGUs of Basilan  and ARMM for another meeting in Malacañang to talk about the problems of the island and the whole region,” Hataman said.

“President Duterte is very concerned and wants one thing for the Bangsamoro — lasting and meaningful peace,” he added.  SFM