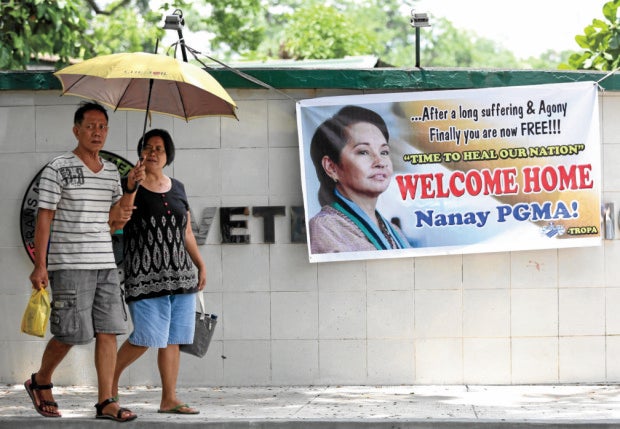 Visitors pass by a message of support for Representative and former Pres. Gloria Macapagal Arroyo outside Veterans Memorial Medical Center’s in Quezon City where she still remains. The Supreme Court ordered her release from hospital arrest yesterday after an 11-4 vote dismissing plunder charges against her.
INQUIRER PHOTO/LYN RILLON

One of the visitors of Arroyo on Thursday was Pasang Masda president Obet Martin, one of the supporters of the former president’s projects to modernize public transportation during her term.

“I visited her because I wanted to see how she is doing,” Martin told members of the media outside the VMMC.

He also said that Arroyo appeared happy with the acquittal but at the same time sad that she still cannot leave the VMMC despite the decision of the High Court.

“We are also saddened with the delay in her release. We believe she should now be granted her freedom,” Martin added.

The Pasang Masda leader added that Arroyo also told him that she will submit herself to a medical checkup once released from the VMMC.

Aside from Martin, other visitors of the former President were ex-Manila Vice Mayor Isko Moreno and lawyer Ferdinand Topacio.

Topacio said that they have waited for three days but there is still no release order for her.

Despite the delay, Topacio said the Pampanga representative remains upbeat and eager to work after her release. He added that she will visit her constituents “who have been deprived of her personal touch.”

“She is a person of strong faith. She is taking it in stride and patiently waiting,” Topacio added.

Asked about another plunder case planned to be filed by the Office of the Ombudsman, the lawyer said it is the prerogative of the office but noted that they hope this will not be another instrument for his client to be harassed.

READ: Morales to Arroyo: Not so fast

“This has become part of their harassment tactics,” Topacio added.

He also mentioned that they are carefully studying the option if they will file charges against Arroyo’s accusers.