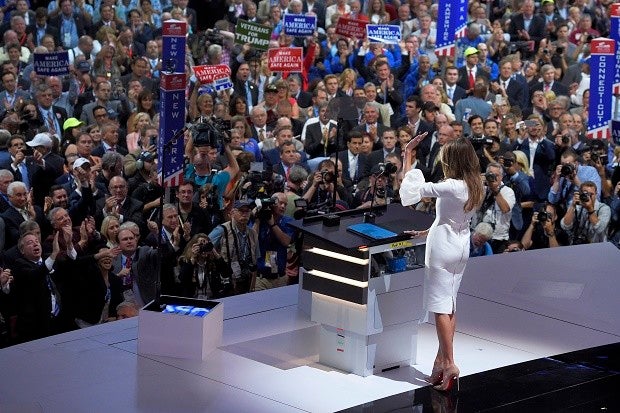 Melania Trump, wife of Republican Presidential Candidate Donald Trump waves to the delegates after her speech during the opening day of the Republican National Convention in Cleveland, Monday, July 18, 2016. AP

CLEVELAND — With Donald Trump’s campaign reeling from charges of plagiarism, a speechwriter for his company took the blame and offered to resign over nearly identical passages from Melania Trump’s Republican convention speech and Michelle Obama’s remarks eight years ago.

The speechwriter, however, made it clear that Melania Trump knew that the passages she read to an enthralled convention Monday night had come from Michelle Obama.

“A person she has always liked is Michelle Obama,” the speechwriter, Meredith McIver, said of Mrs. Trump in a statement Wednesday from the campaign. “Over the phone, she read me some passages from Mrs. Obama’s speech as examples. I wrote them down and later included some of the phrasing in the draft that ultimately became the final speech.”

Donald Trump rejected McIver’s resignation. “She’s a terrific person,” he told ABC News on Wednesday. “She just made a mistake. And I thought it was terrific the way she came forward and said look, it was a mistake that I made.”

The controversy hung over the opening days of the GOP convention, overshadowing Mrs. Trump’s performance, which was warmly received by those in the convention hall.

It also distracted from an event designed to unify Republicans behind the billionaire businessman, while introducing his family to the nation.

For two days, the Trump campaign tried to brush aside any talk of plagiarism, calling the criticism absurd.

The controversy erupted on social media Monday night after her speech as sharp-eyed viewers expressed outrage over the speech’s similarities to the one Mrs. Obama delivered at the 2008 Democratic convention. It continued Tuesday as the Trump campaign’s explanation failed to mollify critics.

The passages in question came near the beginning of Mrs. Trump’s nearly 15-minute speech.

In one example, Mrs. Trump said: “From a young age, my parents impressed on me the values that you work hard for what you want in life, that your word is your bond and you do what you say and keep your promise, that you treat people with respect.”

Eight years ago, Mrs. Obama said: “And Barack and I were raised with so many of the same values: like, you work hard for what you want in life, that your word is your bond, that you do what you say you’re going to do, that you treat people with dignity and respect.”

There were similar overlaps in a passage dealing with conveying to children that there is no limit to what they can achieve. Mrs. Trump’s address was otherwise distinct from the speech that Mrs. Obama gave when her husband was being nominated for president.

For Mrs. Trump, 46, a Slovenian-born former model who is Donald Trump’s third wife and 24 years his junior, the controversy marred a moment in the spotlight that had been months in the making.

The speech required her to overcome her wariness about public speaking and the traditional role of the politician’s wife, as well as her heavily accented English, to present herself to the public as her husband’s partner, a poised mother and wife passionate about issues affecting women and children.

Asked Wednesday how his wife was handling the reaction, Donald Trump told ABC: “It’s a different world. Who would ever think, that to this extent, everywhere you move, no matter where you breathe, it’s a big deal? But she’s a good woman, she’s a strong woman.”

McIver said: “I did not check Mrs. Obama’s speeches. This was my mistake, and I feel terrible for the chaos I have caused Melania and the Trumps, as well as to Mrs. Obama. No harm was meant.”

“I asked to put out this statement because I did not like seeing the way this was distracting from Mr. Trump’s historic campaign for president and Melania’s beautiful message and presentation,” McIver said.