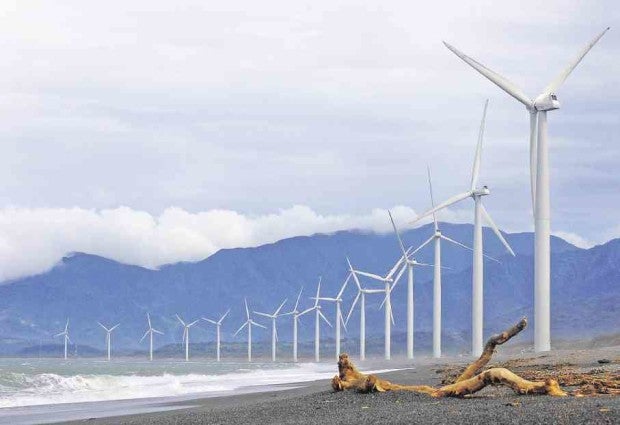 ILOCOS Norte is becoming known for its renewable energy projects, like this set of windmills in the town of Bangui that is already producing electricity without the pollution associated with coal-fired plants or those run by fossil fuels. RICHARD REYES

LAOAG CITY—-Members of the Ilocos Norte provincial board are studying a proposal to enact a policy that would make the province rely solely on electricity generated by renewable energy, as a display of support for its wind, solar and hydro power investors.

The proposal, initiated on Monday by Board Member Mariano Marcos II, chair of the committee on environment, also seeks to establish Ilocos Norte as the first “clean, green and coal-free province.”

Ilocos Norte currently hosts wind power farms in the towns of Bangui, Burgos and Pagudpud that produce a total of 283 megawatts (MW).

The province also has solar power projects in the towns of Currimao and Burgos that can produce 26.7 MW, and the 5-MW Agua Grande hydroelectric plant in Pagudpud.

“There has been no proven system or technology yet that is not harmful to the environment,” Marcos said. But as technology advances, Ilocos Norte intends to eliminate carbon emissions that contribute to global warming when coal, gas or oil are burned to generate electricity or to fuel cars, he said.

“To be consistent [about our environmental aspirations], we need to become clean all the way,” he said.

According to Marcos, the province has opened up vast lands for green energy projects.

Most popular are the wind farms put up by the Northwind Power Development Corp. in 2005 along the coastlines of Bangui Bay facing the West Philippine Sea. These facilities have become tourist attractions.

The Bangui wind farm helped encourage other renewable energy investors to take heed with bigger and wider wind farm coverage in the coastlines of Burgos and Pagudpud, where the strongest winds blow as established by wind tests.

In a recent presentation of the North Luzon Renewable Energy Corp. at its farm site in Barangay Caparispisan in Pagudpud, sub-station manager Elec Costales said the 81-MW wind farm has spared the environment 101.25 tons of carbon dioxide that would have been expelled annually since it began commercial operation in November 2014.

This means that the output has replaced 42.05 million liters of fuel worth $13.2 million, said Costales.

The proposal also sought to stop any office or agency of the provincial government from issuing any permit, authorization, endorsement or any expression of support to the development of coal projects in Ilocos Norte.