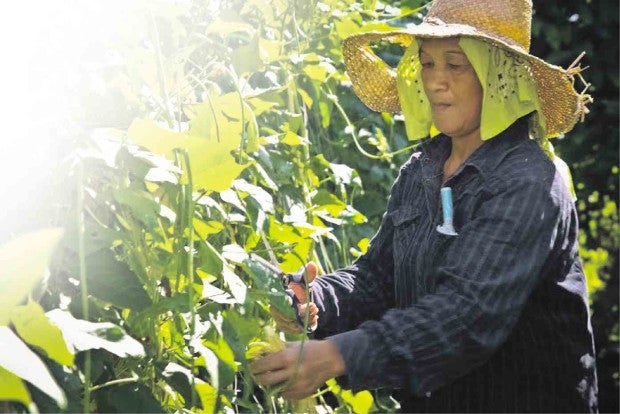 DORIA Cabrera harvests string beans at Pamana Organic Vegetable Breeding Station in the University of the Philippines Los Baños (UPLB). A research center will soon rise on UPLB campus to study the impact of climate change on crop and animal behavior and diseases. KIMMY BARAOIDAN

A pest attack that devastated coconut plantations in Southern Tagalog in 2014 served as an unintended trigger for a group of scientists to look deeper into the relationship of climate change and the growth and behavior of animals, crops, insects and diseases.

“We were caught flat-footed with cocolisap (coconut scale insect). Imagine, at that time, we didn’t even know the life cycle of this scale insect,” said Amelia Guevara, former science and technology undersecretary.

Inquirer reports said the cocolisap (Aspidiotus rigidus) was first detected in the country in 2009 in Batangas province but scientists traced its origin to Sangi Island in Indonesia in the 1920s. It attacks coconut trees by feeding on the sap and causes the leaves to dry up and turn brown before withering.

The government, in 2014, declared a cocolisap outbreak, infecting as many as 2.1 million coconut trees in the Calabarzon (Cavite, Laguna, Batangas, Rizal, Quezon provinces) region and in parts of Mindanao.

The agriculture sector’s experience with cocolisap was the proverbial seed that a facility for climate change-specific agricultural experiments would plant on a 4-hectare land at the University of the Philippines Los Baños (UPLB) in Laguna province.

Guevara, who served as science and technology undersecretary for research and development, joined former UPLB chancellor Rex Victor Cruz in the recent groundbreaking ceremony for the Controlled Environment Research Facility (CERF). Cruz was part of the United Nations Intergovernmental Panel on Climate Change that was awarded the Nobel Peace Prize in 2007.

CERF will serve as a venue for experiments on the responses of crops, animals, pests and diseases to climate change and other stress factors.

Guevara said it was 2013 when Cruz’s group proposed to the Department of Science and Technology a project that would monitor watershed and the environment long term. She said the group told her that the outbreak of cocolisap was partly triggered by climate change.

Guevara wanted to have a facility that could simulate various environmental conditions, so she sought a meeting with Cruz.

They came up with the idea of building CERF.

She said she wanted the facility to give priority to the coconut in its study. She said there should be growth chambers for tall trees in CERF to help in studies on coconut trees and cocolisap.

“I’m sure you know the economic importance of coconut, plus the fact that we don’t want a repeat of the cocolisap,” she said.

CERF is a component of the Monitoring and Detection of Ecosystems Changes for Enhancing Resilience and Adaptation in the Philippines (Modecera) program. Modecera aims to develop long-term databases that would track changes in agricultural and other ecosystems in selected landscapes and watersheds across the country.

Cruz said CERF will house pieces of equipment that can control environmental factors like temperature, light, humidity, carbon and carbon dioxide, among others.

CERF will have several component facilities. The head house will have the offices of researchers and control systems in other facilities. It would house laboratories, walk-in growth chambers, reach-in chambers, whole tree chambers, greenhouses, screen houses and a rhizotron (plant-root observation chamber).

In the walk-in growth chambers, studies on population dynamics and behavior of selected pests and diseases can be done. Here, researchers can also look into the responses of crops, livestock, and selected flowers and plants to varying climate conditions.

In the whole tree chambers, the physiology of individual trees and their responses to changes in air temperature, soil moisture, irrigation, carbon dioxide levels, and humidity can be studied.

Solar radiation, temperature, relative humidity and water supply can be controlled in the greenhouses and screen houses to see how crops and wildlife species respond.

The rhizotron, Cruz said, will allow researchers to look underground and see what is happening to the root system of crops.

“We’ll better understand how roots are developed and, at the same time, how [they interact] with the condition of the soil and nutrients and other elements that we find in the soil,” he said.

Cruz said these facilities will help identify which factors are more influential than others, something that cannot be done in field trials.

A facility such as CERF could be useful in studying coconut, the project’s leaders said.

Studies on coconut and the cocolisap could give researchers better understanding of the nature of the pest and factors that could trigger another outbreak.

This knowledge could prepare farmers in the event of another outbreak so they could avoid incurring heavy losses.

Renato Belen, owner of Ato Belen’s Farm in San Pablo City, also in Laguna, said his coconut trees were not spared from the cocolisap outbreak back in 2014.

He said he lost almost all of his coconut trees that time.

But Belen said his coconut farm has recovered from the infestation, noting he now has around 300 healthy trees.

“Whatever is best for the plant, whatever they want to do [at the CERF] is a good thing,” Belen said.

Cruz said the construction of CERF will start either in August or September. Once finished, it will open up research opportunities in the university and other partner state universities and colleges.

“I’m confident that this facility will further enhance the quality of research that the university produces, especially in developing technologies and [solutions] that will benefit our fellow Filipinos,” said UPLB chancellor Fernando Sanchez during the groundbreaking ceremony.

“But it doesn’t mean that CERF will only cater to the needs of Modecera. It will be open to other studies as well,” Cruz said.

“To me, predicting what will happen … is one very important contribution of this facility to agriculture. We keep on saying one of the most affected sectors is agriculture. But how, exactly, will [climate change] affect agriculture?” Guevara added.

While it is already known that climate change can decrease agricultural yield, Guevara said the problem is not that simple.

She said effects of an increase in carbon dioxide, for example, are not too evident.

She said if a crop flowers later, then a usual three cropping systems a year, for instance, would be reduced to two, consequently lowering yield.

Studying climate change effects in a facility like CERF can help in mitigation and adaptation, Guevara said.