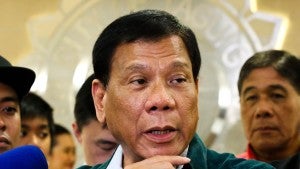 TIPO-TIPO, Basilan – President Duterte’s visit to this province on Thursday, will be limited to Isabela City, where the headquarters of the 104th Army Brigade is located, according to local officials.

Governor Mujiv Hataman of the Autonomous Region in Muslim Mindanao said President Duterte has scheduled a command conference briefing with top military officials, a meeting with local leaders,  and a “talk” with soldiers.

Hataman assured the public that Basilan has been made safe for high profile visitors like the President.

Hataman did not say if Duterte would meet with local residents, including the more than 3,000 families displaced by ongoing clashes between the troops of the Armed Forces of the Philippines and the Abu Sayyaf bandits in the towns of Al Barka, Tipo-Tipo and Ungkaya Pukan.

Colonel Cirilo Tomas Donato, commander of the 104th Army Brigade, said it would not be safe for the President to go to the three towns “because of the presence of the Abu Sayyaf Group.”

On Wednesday morning, Hataman led the diastribution of relief goods to evacuees in Tipo-Tipo.  SFM 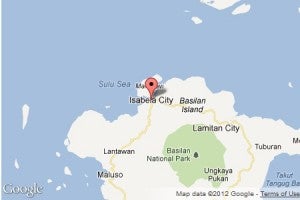