De Lima not backing down despite ‘vicious attacks’ 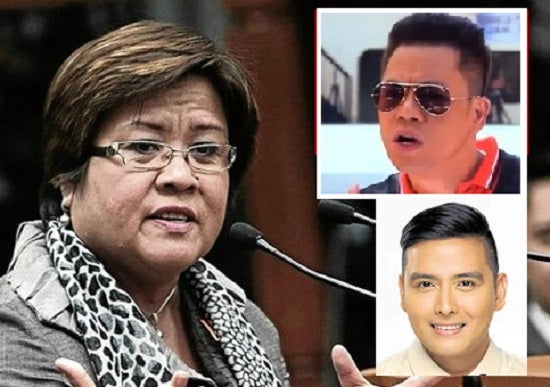 Senator Leila de Lima vows to fight on amid ‘vicious attacks’ against her. A video recently went viral showing her belting a song while drug lord Herbert Colangco (top inset) supposedly sat beside her. De Lima belied that claim saying it was Rep. Alfred Vargas (bottom inset) who was with her in the video. INQUIRER FILES

Neophyte Senator Leila de Lima said she would not be cowed or intimidated despite what she described as “incessant vicious attacks” against her in the social media.

“I know that I’m now a subject of incessant vicious attacks in the social media. But I don’t intend to dignify them by probing into who’s behind them and why,” De Lima said in a text message to reporters on Monday.

“It will just be a waste of time. Pinapa sa Diyos ko na lang mga ganyan,” she said.

De Lima was still reacting to aviral video which supposedly showed her rubbing elbows with one of the country’s alleged top drug lords, Herbert Colangco, during an event last year.

The senator has already clarified that the man in the video was not Colangco but Representative Alfred Vargas.

De Lima lamented that she was “practically defenseless” against these rabid attacks in the social media.

“My only defense is a clear conscience and my fidelity to the Constitution and the law,” she said.

“But if they think I will be cowed or intimidated, they’re grossly mistaken!” the senator added.

De Lima earlier filed a resolution in the Senate calling for an “urgent” investigation into the “rampant extrajudicial killings and summary executions of suspected criminals” in the country./rga