Love is love in communist movement 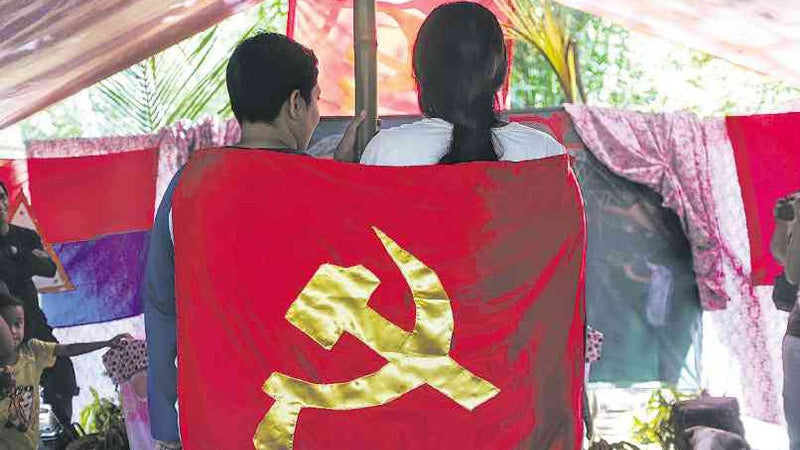 LESBIAN WEDDING Draped with a crimson flag with a golden hammer and sickle and surrounded by heavily armed rebels, Maymay and Diane pledge their love in the first lesbian wedding ceremony administered by the Communist Party of the Philippines in Mindanao. KARLOS MANLUPIG / INQUIRER MINDANAO

DAVAO CITY—“Kiss! Kiss!” the crowd cheered, sending birds flying from their perches in a jungle somewhere in the mountains of Mindanao.

It was a liberating day, they said.

A crimson flag with the golden hammer and sickle draped over their shoulders, Maymay and Diane kissed each other in a wedding ceremony administered by the Communist Party of the Philippines (CPP).

It was the first lesbian wedding in Mindanao and it happened under the canopy of trees guarded by heavily armed guerrillas. The first such wedding was reportedly  held somewhere in Metro Manila.

“Work on improving your relationship while working on enriching your commitment to the people and the revolution,” a commander of the New People’s Army (NPA), armed wing of the CPP, said during the ceremony.

“I was really speechless with admiration when I first saw her. Diane just had a bath that time and she had not combed her hair. I immediately fell for her,” said a giggly Maymay.

She narrated that as days passed, she became more certain that what she felt for Diane was special.

“It was not an easy process. Days passed and my feelings for her grew stronger until I was sure that I love her,” she added.

Maymay explained that she had to undergo the proper process of entering into a relationship inside the communist movement, which includes meetings and a green light from both of their collectives.

Each member of the underground movement is part of a cell or collective where relationships are also being discussed following the principle of politics over personal life.

With a shy smile, Maymay told the Inquirer that she and her group had written a letter to express her intent to court Diane and sent it to the latter’s collective.

“We sent the letter on Jan. 6 in 2014, and Diane and her collective accepted it warmly,” Maymay said.

A process called integration starts  once the other collective agrees to accept the courtship. Both will be given time to experiment—spending time together to confirm their feelings and to attest that the blooming relationship will not affect their political responsibilities.

“I kept working on courting her until I got her sweet ‘yes’ after six months,” Maymay shared.

Like all relationships, Diane and Maymay had their share of ups and downs, but these eventually led to a very special day.

A year after Maymay sent her letter for Diane, she proposed in the middle of the plaza of one of the biggest cities in Mindanao.

Everything was well prepared just like how a coordinated NPA attack was planned, they said.

“Our special friends were there. I asked some of them to sing songs while others took videos and photos. It was there where I popped the question to Diane,” Maymay narrated.

For those  in the revolutionary movement, a year passing by after engagement is already a long engagement.

“Because of reasons beyond our control, including our political work, our wedding was delayed. We, however, used this opportunity to further refine our relationship,” Maymay said.

But the personal process, especially the preparation for the marriage, was more challenging for Diane.

“I am a Muslim. The adjustments when you enter a same-sex relationship are very difficult,” Diane said.

When she started dating Maymay, eyebrows were raised in her family and in her community.

“It was a very big struggle to make my family and village accept me for what I am,” Diane said.

Her family, Diane said, eventually accepted her relationship with Maymay, but was still against their marriage.

“My parents knew about my wedding, but no one came except for some of my cousins who are in the NPA,” she said.

Diane stroked her long curly hair as she narrated that she had been open about the LGBT community since she was in high school.

“I was not yet sure that time about my preference, but I was very close to members of the LGBT,” Diane said.

Everything, she said, was a process.

“I had a same-sex relationship only  inside the communist movement. And it is a process of opening up and acceptance,” she said.

The communist movement follows a very strict policy called On Proletarian Relationship of Sexes, which was ratified in 1998 to include same-sex relationships and marriages.

In 2005, the first NPA gay couple—Andres and Jose—were married in southern Mindanao. They separated years later, and one of them died from sickness in the mountains.

“Our wedding is an assertion for equal love. We are all humans and we should all have the same right to choose whom to love and be a partner for life,” Diane said.

With bullets on their palms, the newlyweds did not just vow to love each other more every day but also to prove to the world that like other people, it was the same love.

Read Next
Siblings with blood disorder need P18K
EDITORS' PICK
Ahead of ONE: Full Blast II, Mongkolpetch warns Elias Mahmoudi: ‘Watch out for my fists’
G7 rivals China with grand infrastructure plan
Rare earth metals at the heart of China’s rivalry with US, Europe
PNP, PDEA destroy P25.8M worth of marijuana in Kalinga
Alex Eala wins Grand Slam on Independence Day: ‘I hope I made my contribution to the country’
Kai Sotto continues to inspire Filipinos by sharing his passions and stories with Smart Prepaid
MOST READ
Chel Diokno, Bro. Eddie, Ate Vi decline 1Sambayan 2022 poll nomination
1Sambayan names 6 choices to pit vs Duterte’s anointed in 2022
Groups slam Duterte ‘surrender’ to China
PH to launch biggest satellite in 2023
Don't miss out on the latest news and information.