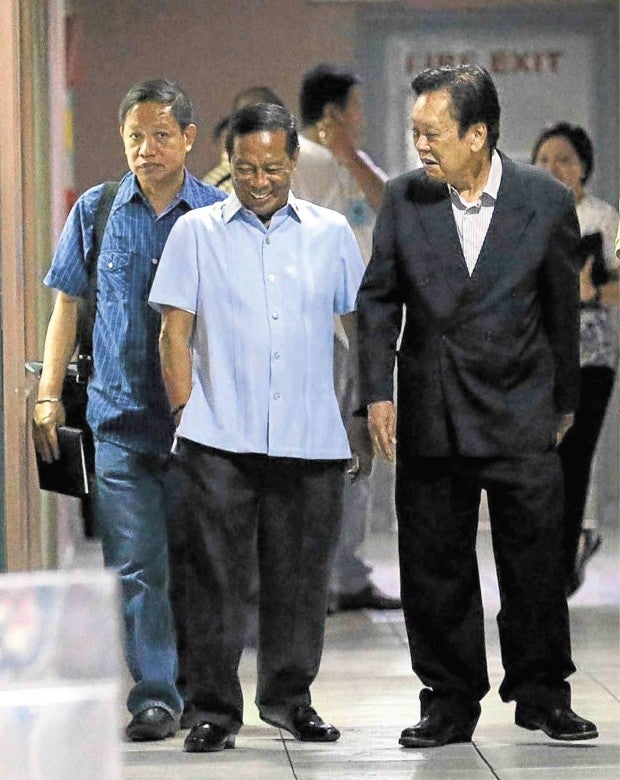 Even before a warrant could be issued for his arrest, former Vice President Jejomar Binay posted bail yesterday, a day after he was indicted on graft and malversation charges over irregularities in the construction of the P2.28-billion Makati City Hall Building II.

Binay appeared before the Sandiganbayan’s Third Division early afternoon to complete the paperwork for his temporary liberty, along with his lawyers and fellow respondents in the graft cases, including his son, former Makati Mayor Junjun Binay.

On Thursday, the Binays and several other former Makati officials were indicted on charges that they rigged the bidding for the design and construction of the allegedly overpriced Makati carpark.

The P2.28-billion parking building began construction in 2007 when the elder Binay was still mayor of Makati. It was completed in 2013 during the term of his son, Junjun, who was dismissed and disqualified from public office last year because of the charges.

In a statement, Binay’s legal counsel Daniel Subido said the former Vice President was “eager to go to court to prove the grave abuses of the Ombudsman and have these frivolous cases dismissed.”

Escorted by security aides, the Binays avoided media cameras as they hurried through the booking procedure, including fingerprinting and the payment of bail.

The bail totaled P376,000 for Binay, who was indicted on four counts of graft, one count of malversation and nine counts of falsification.

The presiding justice of the Sandiganbayan yesterday assured the Binay camp that the court would hear the cases based on “evidence on record” and not on politics.

“We don’t care about politics. Our work here is not swayed by politics, but [is] dictated by the evidence on record,” Presiding Justice Amparo Cabotaje-Tang told reporters after the cases were assigned to the Sandiganbayan Third Division.

But Tang refused to comment on this. “I do not want to dwell into whether there is politics involved here or not because the first and ultimate work of this court is to dispense justice,” Tang said.

‘Rule based on evidence’

“Repeatedly, we have said, we will simply rule based on evidence,” she added.

Subido, Binay’s lawyer, also accused the Ombudsman of violating the former Vice President’s constitutional rights in filing the case, saying the charge sheet showed only “a tenuous conclusion of conspiracy.”

He added: “Even the prosecutors of the Ombudsman sought clarification from the latter regarding the previous cases filed against the Makati officials. This shows the sloppiness of the work done by the Ombudsman in her attempt to maliciously indict the Binays by way of trial by publicity.”

Subido said the Commission on Audit had not issued, for nearly a decade, any audit observation memo or disallowances in the payments made for the project.

The new cases against the Binays were assigned to the Third Division, the same court hearing separate charges filed against the younger Binay and several other former Makati officials involved in the bidding and construction of the Makati carpark.

The antigraft tribunal opted not to include the 14 cases against Binay in the weekly raffle of newly filed cases, as the charges were tied to the same contracts, Tang said.

“The new cases that have been filed relate to the same transactions, so to avoid any potential conflict in the rulings in any of the divisions of the court, the court en banc decided to have these newly filed cases … consolidated with the earlier cases against Junjun Binay,” she said.

Tang said the elder Binay should have already been included in the earlier cases, “were it not for his immunity [from suit].” TVJ