Forms can now be downloaded from website and filled up at home
Philippine Daily Inquirer / 06:04 PM July 15, 2016 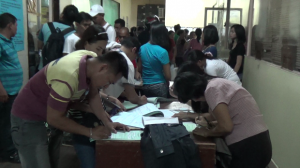 MANILA — Want your voter registration experience to be faster? Download the forms from the Commission on Elections website before heading out to your local Comelec office.

The Comelec encouraged voters signing up for the barangay and Sangguniang Kabataan polls to download the needed forms at home to save time on filling up the forms at local offices.

James Jimenez, the poll body’s spokesperson, said doing so would mean a faster processing of applications since the voter could accomplish the forms at home.

“Accomplishing the forms ahead of time will cut down on the queuing time for you and for everyone trying to get registered or re-activated,” he said.

The Comelec set the voters’ registration period for the barangay and SK elections from July 15 to 30, with Comelec offices open even on weekends and holidays to accommodate voters.

The forms can be downloaded at http://www.comelec.gov.ph/?r=2016BSKE/VoterRegistration/ApplicationForms, where three types of forms are available.

These are the applications for new registration, for reactivation, and for application for change or correction of entries.

The forms should be printed on long bond paper, with the voter accomplishing the forms in their own handwriting.

Jimenez said it would be better if the voters accomplish the forms at home instead of hurriedly filling it up at the local Comelec officers.

“We encourage the public to take advantage of the downloadable voter registration forms that they can fill-up at home, before they head to their local Comelec offices to register,” he said.

Those qualified to register for the SK polls are Filipinos between 15 and 30 years old, and residents of their barangay for at least six months by October 31, the day of the elections.

Voters are required to have their biometrics data such as photos, signatures, and fingerprints recorded. After filing the application form, the voter will be given an acknowledgment receipt.

Earlier, the Comelec expects six million voters to register for the barangay and SK polls.

The election period will begin on October 1 and end on November 7, during which a gun ban will be enforced. A liquor ban will be implemented on October 30 to 31.  SFM

Read Next
Duterte on due process for accused cops: Why? I’m not the court
EDITORS' PICK
Climate Change Commission and Nestlé PH to discover sustainability-focused solutions
Legarda emphasizes role of ICC/IPs in nation building this IP month
Renewal of driver’s license now requires taking LTO education seminar
TNT nears PBA crown after rout of Magnolia in Game 4
Work-From-Home is here to stay and requires reliable logistics
PH still at bottom of COVID-19 economic resilience ranking
MOST READ
Drivers now required to take driver’s education upon license renewal – LTO
PH still at bottom of COVID-19 economic resilience ranking
Marcos Jr’s ‘special diploma’ from Oxford: You can have it, too
OVP spox to Imee Marcos: Robredo is an extraordinary lawyer
Don't miss out on the latest news and information.