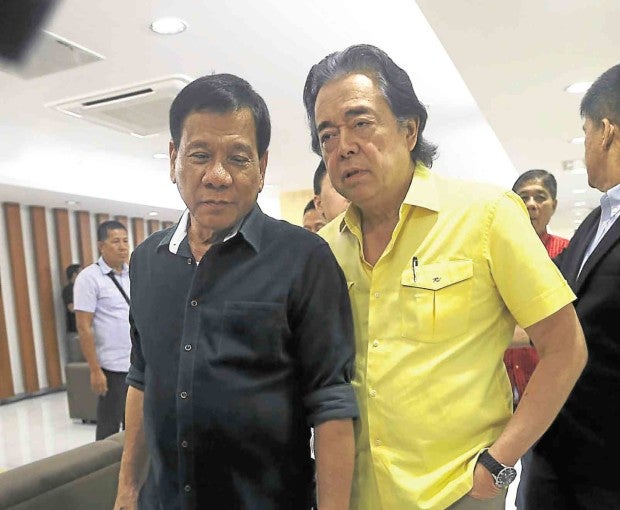 The rocker is now a presidential adviser.

Musician and businessman Ramon “RJ” Jacinto, who composed the campaign jingle of President Duterte in the May elections, has joined the select few who give him counsel, having been named presidential adviser on economic affairs and information technology communications.

Malacañang on Thursday announced Jacinto’s appointment with the rank of undersecretary.

Popularly known as a guitarist and rock and roll musician, Jacinto helped gather support for Mr. Duterte during the campaign and wrote a jingle for him extolling him as a “man of action without corruption.”

He also owns a radio and TV station, as well as a company with interests in real estate development, retail and manufacturing. His family established Jacinto Steel, considered the pioneer manufacturer of galvanized iron sheets in the country.

Jacinto is the latest entertainment personality to get a post in the Duterte administration.

Folk singer Freddie Aguilar, a frequent performer at Mr. Duterte’s campaign rallies, is also reported to be up for the leadership of the National Commission for Culture and the Arts (NCCA).

Bandera recently reported that Aguilar had agreed to head the NCCA but also asked the President to create a department for culture and the arts, as he wanted to have a “cultural revolution” in the country. But until the department is formed, he was willing to try heading the NCCA.

The Palace also announced on Thursday the appointment of Lanee Cui-David, former lawyer of Janet Napoles, as deputy commissioner of the Bureau of Internal Revenue (BIR). Napoles was allegedly a key player in the multibillion-peso pork barrel scam, in which three senators have been charged and arrested.

David is also a San Beda College graduate like the President. She was quoted in earlier reports as saying that her law firm had already withdrawn from the tax cases of the Napoleses.

Arthur Tabaquero, former chief of the military’s Eastern Mindanao Command, is the new presidential adviser on military affairs with the rank of undersecretary.

Gamaliel Cordoba has been reappointed commissioner of the National Telecommunications Commission.