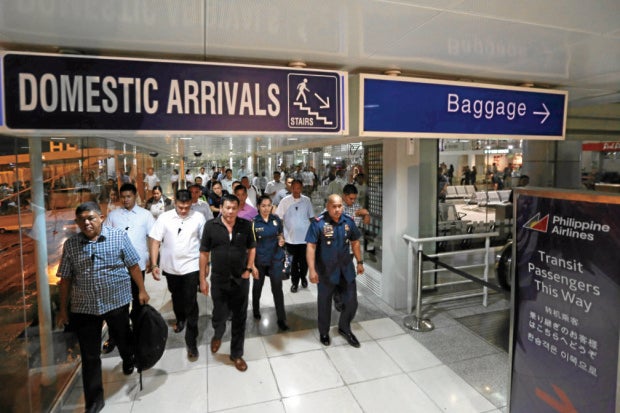 ECONOMY FLIGHT. Despite the security risk, President Rodrigo Duterte travels from Manila to Davao City in an ordinary commercial flight of the Philippine Air Lines on July 7, 2016. Presidential Photographers Division

A Davao City-bound commercial flight from Manila transported President Duterte Thursday evening after he ditched the use of a private plane for the first time since he assumed post as chief executive.

The photos also showed the President going through the airport security measure of the walk-through metal detector.

Accompanied by members of the Presidential Security Group, he walked through the airport terminal and waved and shook hands with fellow passengers, several of whom whipped out their cell phones to capture the close encounter with the President.

Earlier, he said he planned to take commercial flights as President to shuttle between Manila and his Davao City hometown.

During his first meeting with the Cabinet, he also told them to shun special treatment.

“We should treat ourselves just like any other Filipino traveler,” he had said then.

He also planned to put a stop to the no-fly zone protocol at airports when the President’s flight is taking off or landing, as it delays other flights.

Mr. Duterte had been using private planes to move around the country when he was a candidate, a President-elect and during his first few days as chief executive.

Mr. Duterte intends to divide his time between Manila and Davao City.

While in the country’s capital, he has chosen Bahay Pangarap as his official residence.