‘They have to face music’ | Inquirer News
Close
menu
search

‘They have to face music’ 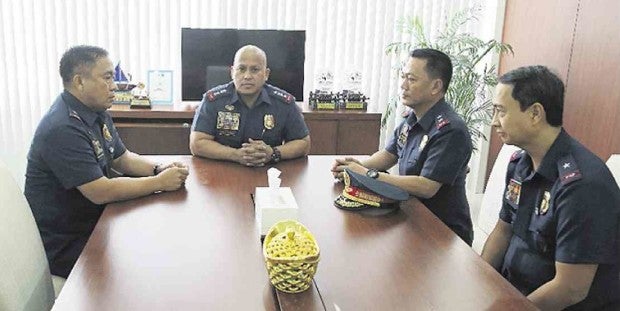 “I WANTED to cry with them… but they have to face the music.”

Philippine National Police Director General Ronald “Bato” dela Rosa said this after he met on Wednesday with three of the five ranking police officials whom President Duterte named on Tuesday as alleged protectors of drug lords.

A 17-second video released by the PNP showed Dela Rosa and Chief Superintendents Joel Pagdilao, Edgardo Tinio and Bernardo Diaz huddled at one end of a conference table, barely talking and their faces grim-looking.

“They were sad.  They want to explain their side and I listened to their side.  What we talked about inside are purely intimate and personal and I cannot discuss it in public.  We’ll just keep it among ourselves,” Dela Rosa recounted in a press briefing.

He said he first met with Diaz in his official residence and the two later  joined Pagdilao and Tinio in his office.

“I gave them the assurance that even if they belong to an upper class, I am their father right now,” he said, referring to their schooling at the Philippine Military Academy (PMA).

“As the father, I have to look for their welfare.  If they did anything wrong, then they have to face the music,” said Dela Rosa, who received three additional stars when he was promoted to head the 150,000-strong PNP, bypassing a number of senior police officials.

Asked if any of the officials became emotional, the PNP chief replied: “That’s very intimate.  Please stop asking, I myself might cry if you persist in asking me. My tears might fall.  I felt what they felt, I’m a human being, too.”

He said he instructed the three officials, who are currently on “floating” status following the July 1 general revamp, to report to the National Police Commission (Napolcom), which was tasked by Mr. Duterte to conduct an administrative investigation.

Representatives of the Napolcom and the Department of the Interior and Local Government (DILG) as well as Dela Rosa’s directorial staff were present during the hourlong meeting that started at 11:50 a.m.

All of the five active and retired officials have denied wrongdoing.

Dela Rosa declined to discuss the evidence used by the President as his basis in publicly accusing the three active officials of being alleged protectors of drug lords.

“We don’t want to preempt the Napolcom investigation.  Let’s just wait for it,” he said.

Duterte, being a lawyer and a former public prosecutor, knows what he was doing and this was the reason he wanted a formal investigation, Dela Rosa said.

He said the President might name other police officials involved with drug syndicates.

“For all we know the President’s list is not just up the rank of senior superintendent, may even down to Police Officer 1.  [His list] is several pages long,” he said.

The Napolcom vice chair and executive director, Rogelio Casurao, said the agency was validating the allegations against the officials.

A team of lawyers from Napolcom tasked to investigate the three officials will complete its probe within seven days, while the latter will be given five days to reply, after which the commission can already decide in one sitting if the officials are liable or not. The entire process would take up to a month, he added.

“There are already pieces of evidence that prompted the President to come up with that decision to name them in public. The task of the Napolcom now is validating these pieces of evidence for purposes of establishing probable cause to proceed with dismissal proceedings,” Casurao said in a press conference.

The three officials could face  dismissal from service, if their administrative guilt is established.

Casurao said possible administrative charges against Loot would be handled by the DILG. Criminal charges would be dealt with by the Department of Justice for prosecution in the regular courts.

Casurao said that the investigation would be swift.

Sen. Panfilo Lacson said on Wednesday he would  ask his informants to testify against two of the generals. He said that two officers under him when he was still with the defunct Presidential Anti-Organized Crime Task Force had the same information against two of the officials named. He did not identify them.

“I gathered from one of them, he had personal knowledge of one of the officials’ involvement having served under the latter in one of their  field assignments,” Lacson said.

Also on Wednesday, former Interior Secretary Mar Roxas denied news reports linking the police officials to his unsuccessful bid for the presidency in May and those implicated by Mr. Duterte in illegal drugs.

“Let me emphasize that I have never supported nor encouraged illegal drugs. It is a plague that afflicts families, rich or poor, and destroys the fabric of family life. During my tenure in the DILG, one of my priorities for the PNP was to escalate the fight against illegal drugs. Billions of pesos worth of illegal drugs were confiscated, and hundreds arrested and charged, in fulfillment of my directives,” he said. With reports from Leila B. Salaverria, Christine O. Avendaño and Tarra Quismundo/ac