Gray zone: who will care for Thailand’s elderly? 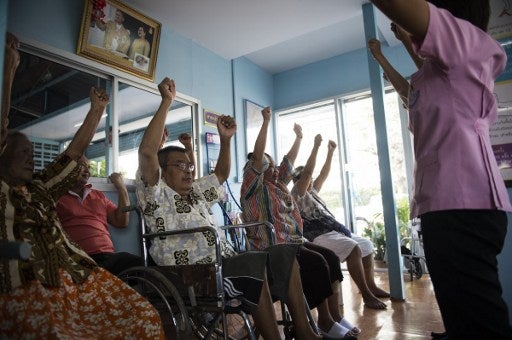 This photo taken on March 3, 2016 shows men and women participating in daily exercises at the elderly day care center in Bangkok. Adult children in Thailand often care for their parents, with the importance of filial responsibility drummed into kids at an early age. But these duties are getting tougher, with the share of elderly Thais expected to double over the next half century to some 17 million people, shrinking the workforce and placing a huge burden on the welfare and medical systems. AFP PHOTO

BANGKOK, Thailand — As he wheels his 77-year-old aunt away from Bangkok’s first day center for the elderly, Nakhon reflects on the familial duties that oblige him to juggle night-shift work and care for his aging relative.

It is an increasingly common predicament in rapidly graying Thailand, where a demographic shift is straining social mores and threatening upheaval for the economy.

“She raised me when I was little so now I will take care of her when she’s old. It’s our culture,” explained 35-year-old Nakhon Thianprasert.

Adult children in Thailand often care for their aging parents — a responsibility drummed into kids from an early age.

But these duties are getting tougher, with the share of Thais over 65 expected to surge from seven to 17 million people over the next three decades, shrinking the workforce and placing a huge burden on the welfare and medical systems.

While other Asian countries with elderly populations — such as Japan and Singapore — have the money to plan for welfare, middle-income Thailand is getting old before it gets rich.

Thailand’s warm weather and abundance of luxury retirement homes makes it a top destination for Western retirees. But the concept is taboo locally.

Nakhon’s community in Bangkok’s northeastern outskirts is working towards a compromise solution.

Using donations, they run a small center where children can drop off their parents during the day while they go to work or run errands.

Earlier this year, the middle-class neighborhood flipped an unused building into a brightly-painted room equipped with a few beds, several rows of plastic chairs and simple exercise equipment.

Nurses and volunteers offer activities like sewing, painting and singing — plus a much-needed opportunity to socialize.

“It is much better than staying home where I always just watch TV and do nothing”, said Nakhon’s aunt, Boonrod Khamhomkul, who suffers from diabetes and is not able to walk on her own.

The center’s head nurse, Larita Chobpradith, goes door-to-door to around the neighborhood to check on older residents and introduce them to the daycare concept.

“Elderly people who have health problems don’t need to be bed-bound any more. That way their relatives can also do their own thing and they won’t be stressed,” she said.

Thailand’s rapid economic development, coupled with a successful contraceptive campaign in the 70s, set the country on the path to aging — a demographic transition that has taken some other developed countries up to 100 years.

But Thailand has only had a few decades to prepare for that shift and some 20 million Thais — a quarter of the population — do not have retirement savings and can only count on a paltry $20 a month state pension.

While the kingdom does offer a universal healthcare scheme, many elderly people, especially those in rural areas, struggle to access it, said Sutayut Osornprasop, the author of a recent World Bank report on aging in Thailand.

He said more state support for community care programs would help ensure no one is falling through the cracks.

“In communities that are interested in elderly issues, we see very good results,” he told AFP. “We need to think about the approach of community-based healthcare.”

Old man of the Mekong

Neighboring nations like Myanmar and Cambodia, whose populations are young, are positioned to become increasingly appealing options to foreign investors looking for cheap labor.

One solution, according to Kirida Bhaopichitr, a researcher at a Thai think tank, is to shift the country’s economy away from agriculture towards services, giving elderly people opportunities to remain in the workforce.

“As Thailand ages the service sector could be a future engine of growth”, she said.

The country is also considering raising the retirement age and creating tax incentives for businesses to hire older workers.

“One day while I was working, I walked out here and saw an old woman carrying a bag and crying,” he told AFP, explaining that the grandmother had been kicked out of her home and had nowhere to go.

“That was the starting moment that made me feel that if we kept letting this happen in the society, it would be trouble for sure.”