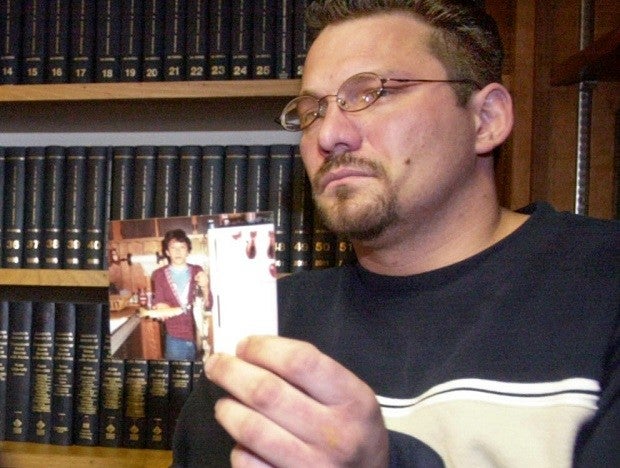 In this Feb. 6, 2003, file photo, Brian Gergely holds up an old photograph of himself while discussing a lawsuit against a priest and the Roman Catholic Diocese of Altoona-Johnstown, during a news conference in Altoona, Pa. Gergely, whose lawsuit was settled out of court in 2005, was found hanged Friday, July 1, 2016, at his home in Ebensburg, Pa., at the age of 46. AP

EBENSBURG, Pennsylvania — A Pennsylvania man who spoke out against clergy abuse after publicly identifying himself as a victim of a predator priest has killed himself, authorities said.

Brian Gergely, 46, was found hanged in his home in Ebensburg on Friday, Cambria County Coroner Jeffrey Lees told The Associated Press on Tuesday.

Gergely went public in 2003 while suing Monsignor Francis McCaa and the Roman Catholic Diocese of Altoona-Johnstown, saying he was abused as a 10-year-old altar boy.

“It takes a great deal of courage to step forward, and even more courage to go public and give your identity instead of a pseudonym. Brian overcame that because he felt so strongly about the sexual abuse of children,” Richard Serbin, the Altoona attorney who represented Gergely said Tuesday. “Tragically, the demons he’s been dealing with since he was molested by Monsignor McCaa finally won out.”

Gergely and other plaintiffs settled their lawsuit against McCaa, other priests and the diocese in 2005. McCaa died in 2007.

McCaa was described as a “monster” in a state grand jury report released in March that criticized the diocese’s handling of clergy abuse claims. He fondled altar boys whom he had told to go without pants under their cassocks, molesting them in a church sacristy, a rectory and even while taking their confession, the grand jury found.

“I was standing in the sacristy and he pinned me to the desk. I was just a little guy,” Gergely told the British newspaper The Guardian after the grand jury report’s release. “My parents were patrons. They were going door to door raising money for the church. The community put Monsignor McCaa on a pedestal.”

Gergely’s funeral is Wednesday at Holy Name Catholic Church, the parish where he had been molested.