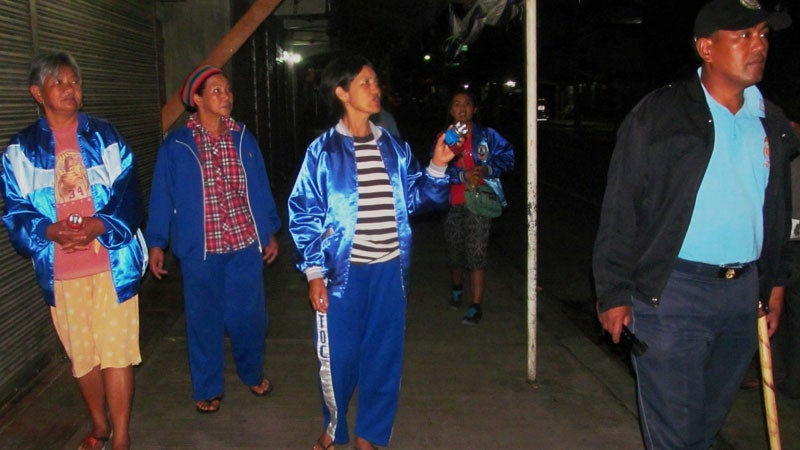 Personnel of the Bontoc Municipal Police Station escort mothers and grandmothers who spend their nights patrolling the streets of Bontoc town in Mountain Province.(From left to right) Gloria Layogan, Lourdes Buenafe, Esther Afali,and Jophine Ngodcho are members of the Bontoc Women Brigade which has been enforcing curfew laws there since 2002. Photo contribution from Ferdie Castañeda

BONTOC, Mountain Province—As the clock strikes 10 each night in this Mountain Province capital, stores and pubs selling beer and liquor hurriedly close their doors while drunken men gingerly make their way home, lest they face the wrath of mothers and grandmothers.

The women, aged 30 to 80, conduct nightly patrols on the streets of this town to help implement the curfew and liquor ban that start at 10 p.m.

“We volunteered and made a vow to [keep] the night watch for our children and grandchildren. We do not really get tired because it is for our children,” said Cecilia Ofo-ob, who joined the women’s patrol on June 27.

“I am over 70 years old now but for as long as my body allows, I will continue to do the rounds,” she added.

Caridad Fersway, a 60-year-old grandmother, said the tasks of the women’s brigade include making sure that computer shops also close their doors once the curfew starts.

“We warn them on the first round. The stores should be closed and they should have stopped drinking when we return,” said Fersway, one of the six elderly women who patrol Samoki village where most of the town’s pubs and shops are.

Armed only with flashlights, the women were eventually escorted by policemen as they conduct their rounds.

Caroline Castañeda, the brigade head, said the elderly patrol started with 64 women in 2002 but the number has declined over the years, as some members have passed on or were “unable to withstand the physical challenge.”

According to Fersway, the Samoki women brigade now has only 12 members, who used to patrol the streets every night until they realized it would be better if they took turns.

The brigade has changed the women’s daily routine.  In the morning, they tend to their rice fields and swidden farms, or attend to house chores. Their nights are devoted solely to keeping things calm and quiet in the community.

The brigade was composed of volunteers and that some of the funds they receive from the provincial and municipal governments are used for uniforms, flashlights and batteries, Castañeda said.

“We prefer persuading people not to violate the law,” she added.

Bontoc Mayor Franklin Odsey said the local government had suggested making the brigade monitor computer shops during school hours, as the nightly patrols might be too taxing for the women.

But the brigade members refused, saying they were “still fit and could handle [the] situation,” the mayor said.

SPO2 Gilbert Batane of the Bontoc police, who went with the Samoki women during their June 27 patrol, said the presence of the elderly women had made people more cooperative.

“There are some stores that close at 10 p.m. but continue the drinking session inside,” he said.

So the brigade members would visit these stores and talk their customers into obeying the curfew.

“Those drunk men would ordinarily fight the police when we enforced the curfew, but they would not dare  disobey their wives, mothers and grandmothers,” said PO1 Paul Afidchao.

The police continue the patrol at midnight when the brigade members have gone home, “but by that time, nobody is loitering around anymore so it makes our job easier,” Afidchao added.