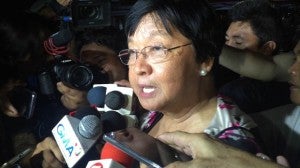 MANILA — Thousands of long-time “job order” employees in the Department of Social Welfare and Development (DSWD) will soon receive benefits enjoyed by the rest of the agency’s work force, according to its new secretary, Judy Taguiwalo.

In her first flag-raising ceremony at the DSWD main office in Quezon City on Monday, Taguiwalo addressed the massive contractualization problem in the department after urging employees to improve services.

Taguiwalo, a retired professor at the University of the Philippines (UP) College of Social Welfare and Community Development in Diliman, Quezon City, is the founding president of the All-UP Academic Employees Union.

A total of 550 vacant regular positions would be filled up immediately and a collective negotiating agreement (CNA) with the employees’ union would be finalized, she said.

But since the CNA would only benefit regular employees and those classified as “casual-contractual,” she said she would push for a “side agreement” to extend benefits to the majority of workers covered by a contract of service or a memorandum of agreement (MOA).

She cautioned, however, about the “limitations” to what the government could provide. “As long as we can afford it, we will make sure there will be added benefits for MOA (workers),” she said.

According to the Social Welfare Employees Association of the Philippines (SWEAP), the DSWD last year had 1,908 regular employees and 9,632 on casual-contractual status without job security but with the same benefits as the regulars.

But 60 percent or 16,855 of the total work force are MOA or “job order” personnel who have no employer-employee relationship with the DSWD and do not receive any of the mandated benefits.

While their employment depends on whether their contracts are renewed every three, six or 12 months, they are also in the frontline services and have been with DSWD for five up to 20 years.

SWEAP has been calling for the regularization of the MOA workers. It staged protest actions during the presidency of Benigno Aquino III when he refused to give a P10,000 anniversary bonus to them despite an appeal from the department.

Taguiwalo said she wanted another side agreement for “flexi-time” hours for working mothers and for those pursuing higher studies.

She stressed that the DSWD’s tasks were to attend to the poor and needy, to improve their systems to hasten the delivery of services, and to get rid of corruption.

The secretary said she would focus on genuine compassion for the poor by extending prompt, adequate and compassionate service, especially to them.