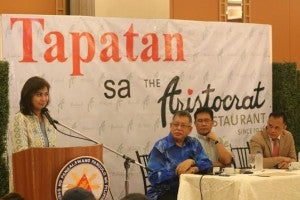 Vice President Leni Robredo pledges to rally support for the Duterte administration in her speech at the Tapatan sa Aristocrat on July 4, 2016. (Photo courtesy of the Leni Robredo Media Bureau)

MANILA — Despite  her political differences with President Duterte, Vice President Leni Robredo on Monday said her main duty was to rally the people to support the administration.

“This administration deserves our support. This is not only for President Duterte but for the entire country,” the Vice President said in a speech at the “Tapatan sa Aristocrat” forum in Manila, a few hours before she was scheduled to pay a courtesy call on Duterte in Malacañang.

“As the Vice President, I believe that my No. 1 responsibility is to help rally everyone behind the new administration,” she said.

She said said infighting among the leaders would not do the nation good.

“We are in the cusp of something big and this is not yet time to let go. There are things that may seem impossible but when we all work together that’s when the impossible becomes possible,”  she said.

Robredo said the country has been recognized in the world for shedding its image as the “sick man” of Asia. Despite this, pressing issues remain and these include poverty, unemployment  and inclusive growth.

“We have to fix them right away. Not tomorrow, not toward the end of six years, but now because these problems represent real suffering of people on the ground,” she said in her prepared speech.

“What is the use of having a high national income when the majority of our people cannot even access that income?” she asked.

Robredo said the root causes of poverty must be attacked while leaders worked to keep the country’s economic standing.

“We cannot just wait for growth to trickle down to the poor. This has been done elsewhere in the world and we can do it here,” she said.

Even without a Cabinet position, Robredo said she could do her part in ensuring that the benefits of economic growth trickle down to the masses by collaborating with the private sector in addressing hunger and food security, universal health care, rural development education and people empowerment.

“We are inviting all groups of individuals who have the passion in these areas to come to office and partner with us. Our doors are open. We need to discuss the best way to tackle our problems. Collaboration is our best resource right now,” she said.

She said she would continue her advocacy for the passage of a freedom of information bill to stop corruption; the creation of more jobs and the ending of contractualization; continuation of the agrarian reform; and pursuit through peaceful means of the country’s territorial rights under threat by China.  SFM