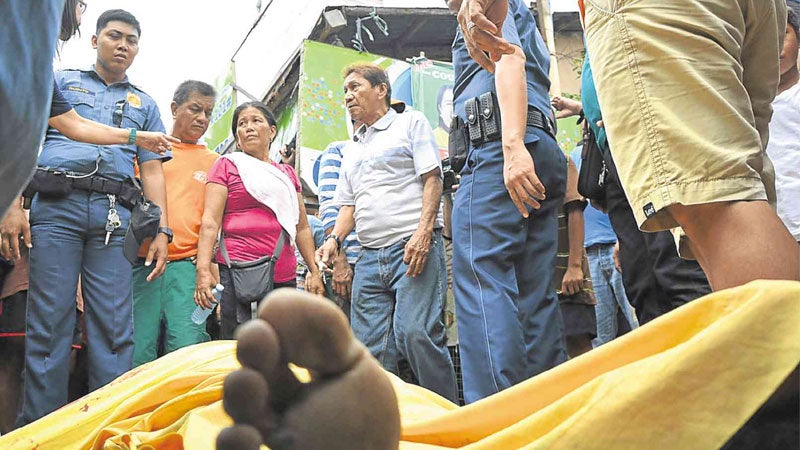 BELIEVE it or not, the Duterte administration is also alarmed at the spike in drug killings in the country.

Speaking to reporters in Malacañang on Monday, presidential spokesperson Ernesto Abella said President Duterte was aware of the spate of drug killings involving police and of what appeared to be summary executions of drug suspects.

Abella said the rising body count was a cause for “concern” in the administration, adding that it could be an indication of the “depth of the drug menace” in the country.

At least 23 drug suspects have been killed since the inauguration of Mr. Duterte on June 30.

Mr. Duterte was elected on an anticrime platform that included killing tens of thousands of criminals and reviving the death penalty for heinous crimes.

He told police not to wait for him to assume office and instead proceed with a determined campaign against drugs.

To inspire police, he offered millions of pesos in bounties to officers who could kill drug lords.

He also urged armed civilians to kill drug pushers and dealers in their neighborhoods, offering them medals and promising to protect them from prosecution.

On July 1, a day after Mr. Duterte’s inauguration, a man tagged as one of the top drug peddlers in Caloocan City and a dismissed policeman who allegedly served as his bodyguard were killed in a gun battle with police.

On July 3, eight alleged drug dealers were killed in Manila. Five of them were killed in what police described as “follow-up antidrug operation” in the Golden Mosque area of Quiapo district.

On the same day, the bodies of two men were found on Palanca Street, also in Quiapo, with tags on them describing them as drug pushers.

Also on that day, an alleged drug dealer was shot dead by police on Route 10, in Manila’s Tondo district.

From July 1 to 3, 13 suspected drug traders and pushers were killed in Quezon province.

At least 22 suspected drug-related killings outside police operations were also reported from May 14 to June 30.

The increasing drug killings have alarmed human rights advocates, who have called for an investigation.

Edre Olalia, secretary general of the National Union of People’s Lawyers, said the killings must be halted.

“The drug menace must stop. . . Yet the apparent serial summary executions of alleged street drug users or petty drug lords, which appear sudden, too contrived and predictable, must also stop,” he said in a statement. “The two are not incompatible.”

In Quezon province, Gov. David Suarez promised to look into the deaths of the 13 drug suspects, and asked the police to explain the “vigilante-style” killings.”

“These drug pushers should be killed. [They] were on our list of illegal drug traders, anyway,” Paguirigan said.

Abella said that while Mr. Duterte had openly expressed his disgust for drugs, the President is “very well aware” that the campaign against drugs must be carried out within the bounds of the law.

“And so whatever needs to be done will be done,” Abella said.

He said the President also knew that hundreds of people  who had admitted to using or selling illegal drugs had surrendered to authorities for fear of ending up dead.

“I’m sure his ear is on the ground and he’s listening,” Abella said, adding that regional rehabilitation centers would be established to help the drug users who had turned themselves in.

In the Visayas, 1,019 drug peddlers, runners and users have surrendered to the authorities since Friday. Two hundred-four of them are from Bohol and 160 are from Cebu, who turned themselves in at different police stations on Monday.

On Sunday, Philippine Drug Enforcement Agency (PDEA) agents seized up to 300 kilos of methamphetamine during a raid on a farm in Claveria, Cagayan.

The Philippine National Police reported that the haul was 180 kg, worth P900 million, in a news conference at Camp Crame, Quezon City, on Monday.

No one was arrested during the raid, but PDEA agents said the farm in Culao village belonged to a certain Rene Dimaya.

In Camarines Sur province, police arrested 12 drug suspects in a raid in Naga City on Saturday.

Asked if the President was condoning the attacks on drug suspects, Abella said: “I don’t know if the term should be ‘condoning,’ but definitely he has a position regarding [illegal] drugs. He’s out to exert firm pressure, firm hand in order to deter the spread of drugs.”

As for the possibility that the President will name in public people involved in illegal drugs, like what he did when he was  the mayor of Davao City, Abella said: “If it does happen, and it may, it will not be without precedent.”

Abella clarified the President’s call for the communist New People’s Army (NPA) to help the government in hunting down drug traffickers.

“What he was saying is that he’s also recognizing that they (the NPA) have the right in order to be able to combat the whole [drug problem]. What I’m saying is, whatever happens, it will still go to a process,” Abella said.

“This is not a free for all. There’s a process. In other words, we’re just expanding the ways of curbing illegal drugs,” he said.