An anticrime watchdog filed a criminal complaint on Friday against former President Benigno Aquino III over the botched Mamasapano incident that led to the deaths of 44 Special Action Force (SAF) officers, a day after he shed his presidential immunity from criminal prosecution.

The Volunteers Against Crime and Corruption (VACC) asked the Office of the Ombudsman to indict Aquino for reckless imprudence resulting in homicide for his alleged role in the failed “Oplan Exodus” operation. The same complaint was also filed against dismissed Philippine National Police Chief Alan Purisima and sacked SAF Director Getulio Napeñas, who planned and directed the operation.

VACC chair Dante Jimenez accompanied Erlinda Allaga and Warlito Mejia in filing the complaint. Their sons, PO3 Robert Allaga and PO2 Ephraim Mejia, were among the 44 elite officers who were killed when they came under heavy fire from Moro rebels on Jan. 25 last year.

The subject of the operation was Zulkifli bin Hir, alias “Marwan,” a known bombmaker responsible for attacks in Southeast Asia. Marwan, who had a $5-million bounty on his head offered by the US government, was also slain in the operation. 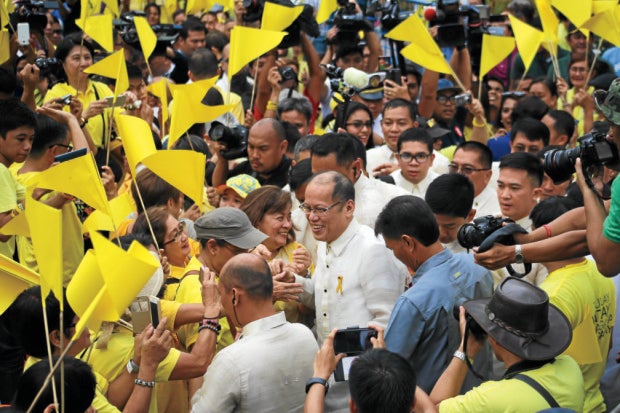 The complaint said Aquino should be held liable for the “brutal bestial deaths” of the elite cops “due to negligence, imprudence, lack of foresight and lack of skill in the planning, preparation and execution of Oplan Exodus.”

“Aquino’s criminal negligence consisted of planning Oplan Exodus with gross and inexcusable negligence and thereafter approved the operation knowing it was flawed,” the complaint said.

It charged that Aquino was criminally liable for allowing Purisima “not only to participate in Oplan Exodus but in the running thereof, and even in giving information and intelligence while the operation was ongoing.” Purisima was suspended at that time over an unrelated corruption charge.

“Respondent Aquino knows, or should have known, that running roughshod over the chain of command would wreak havoc on the many aspects of Oplan Exodus and would result in confusion, ambivalence and total operational chaos,” the complainants said.

The complainants said they wanted Aquino tried for homicide, even though the Ombudsman had earlier cleared him of accountability. They said Aquino approved the plan despite “full knowledge that it was flawed.”

Responding to the accusation, Aquino on Friday slammed the “instigators” of the case who are apparently “setting up the loved ones of the SAF 44 for even more suffering.”

“The loss of the SAF 44 is a tragedy,” Aquino said. “I reiterate that if my instruction to then-SAF Director General Getulio Napeñas were followed to the letter, perhaps the risks of the operation could have been minimized, and that this tragedy could have been averted.”

“I guess this is to be expected from an attention-seeker such as he,” Aquino said.

“I have instructed my lawyers to study possible actions at the appropriate time against those who instigate the filing of frivolous cases, which are nothing more than harassment,” the former President said. 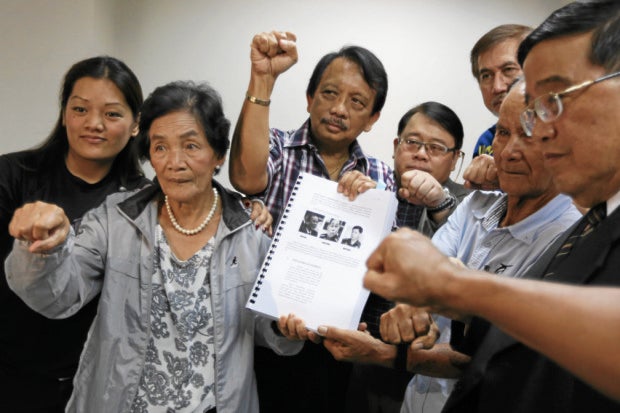 Volunteers Against Crime and Corruption and relatives of Special Action and Forces 44 file a criminal complaint against former President Benigno Aquino lll at the Office of Ombudsman in Quezon City, July 1, 2016.  NIÑO JESUS ORBETA

Sen. Grace Poe, who led investigations into the incident at the Senate, said the case should be “a welcome chance” for Aquino to officially present his side under oath, at a proper forum. A report that they had prepared after the Senate hearings clearly pointed to some failings of Aquino and his men, even as it was only held in aid of legislation.

“The committee report we prepared … has collaterally outlined the participation of President Aquino based on testimonies given under oath by resource persons during the hearings,” Poe said. “Such notwithstanding, the President will be afforded the opportunity to present his side once the Ombudsman conducts its own investigation.”

But Sen. Leila de Lima, who was the justice secretary at the time of the incident, played down the charge as a “media stunt” by personalities out to “pillorize” Aquino as he rejoins the civilian world. She said she expected the “absurd” case would not even pass preliminary investigation.

They should instead “push for the immediate filing of charges against the men actually identified to have engaged the SAF 44 in a firefight in Mamasapano and push for the commencement of the criminal trial,” she said.

Purisima and Napeñas face indictment by the Ombudsman for usurpation and graft. Purisima participated in the planning and operation despite being suspended, without informing the then PNP office in charge Leonardo Espina.

Purisima allegedly usurped the powers of the deputy and committed graft by compelling Napeñas to violation of rules.  Napeñas is charged with violating the chain of command by not directly coordinating with Espina.

Aquino had earlier blamed Napeñas for disobeying his orders and for failing to coordinate with the military and police about the operation, even as it was clear that Purisima also disobeyed orders to properly inform Espina of the operation.

Napeñas, on the other hand, said he did not liaise with military for fear of compromising the operation. With reports from Nikko Dizon and Tarra Quismundo